POLICE have launched an investigation after a video appeared online showing a driver wolfing down a bowl of cereal while making his way to work.

The motorist has been branded “unbelievably stupid” after footage of him overtaking cyclists at 20mph in Edinburgh City Centre while trying to use a spoon to eat his breakfast, surfaced online.

The remarkable footage was captured on a cyclist’s headcam and happened in the busy Meadows area of the city.

The cyclist, called “Raging Bike”, can be heard yelling “What the f***?” as the grey Vauxhall Corsa whizzes past.

The driver is glimpsed using one hand to hold the bowl and steer the car.

Raging Bike catches up with the driver at a set of traffic lights where the motorist can clearly be seen tilting the bowl to get the last remaining morsels.

He then puts the empty bowl on the passenger seat and takes off.

The video has been posted on YouTube with the title “Breakfast at 35mph…look no hands”.

The subtitles add: “Cornflakes and milk at 35mph.”

Police Scotland confirmed that they would conduct an enquiry into the incident and are now looking to identify the driver.

A spokesman said: “We will review this footage and conduct an enquiry to identify the driver.

“Anyone who can assist police with their investigation is asked to come forward.

“Motorists are reminded to ensure they are in full control of their vehicle when driving and should not engage in any activities that can cause distraction or result in a loss of control.

“Anyone found driving inappropriately would be dealt with accordingly.”

A spokesman for the AA said: “It’s pretty stupid. It’s unbelievable really. For some people their car, in a way becomes their home, and they behave in such a way that they would in their house.

“People just don’t seem to have the willpower not to do things they know are wrong, like turning their phone off, or not eating a sandwich while driving.

“It’s the must have, must do attitude.” 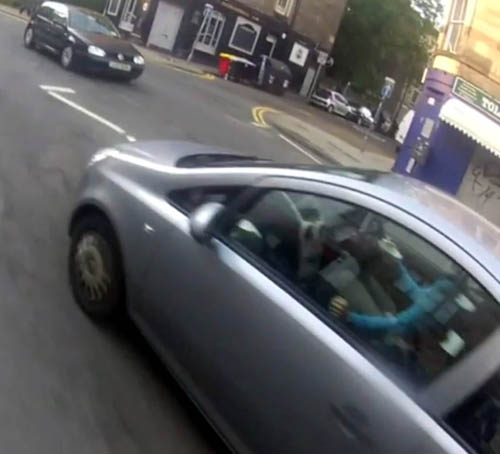 Kevin Clinton, head of road safety at The Royal Society of the Prevention of Accidents (RoSPA) said: “This driver is being irresponsible and risking his own life and the lives of people around him, especially the cyclists he is overtaking.

“Trying to hold and eat from a bowl while driving is a particularly stupid and dangerous thing to do.

Earlier this year it was revealed that drivers caught eating in Scotland would receive higher fines of £90 and three points on their license.

This came after a study at the University of Leeds found that the reaction times of drivers who were eating were 44 percent lower than average.