A LOVING father is donating stem cells to his cancer-stricken daughter in a pioneering procedure never carried out before in Scotland.

Mackenzie Furniss, nine, is suffering from an advanced form of childhood cancer but has a last chance of life thanks to a £300,000 treatment devised by a German doctor.

Her father, Jason, 39, has given his stem cells which will be used in a bid to and eradicate the aggressive cancer which threatens Mackenzie’s life. 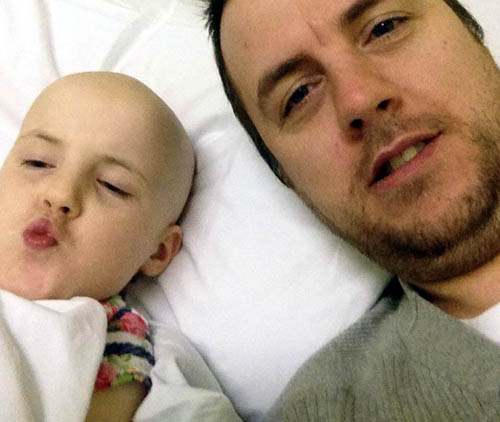 Mr Furniss and his wife, Kimberley, 29, from Sauchie, Clackmannanshire, managed to raise £178,000 towards the treatment before the Scottish Government stepped in with the rest.

The German professor who devised the treatment, Peter Lang, arranged for the treatment to be carried out at Yorkhill Hospital, Glasgow.

It is the first time the procedure – haploidentical stem cell transplantation – has been carried out north of the border and only the second time in the UK.

Mackenzie’s treatment started on Thursday and is expected to take six months, including six trips to Professor Lang’s clinic near Stuttgart.

Both Mr Furniss were tested to see which of the two were the best match to donate stem cells to their daughter, who suffers from neuroblastoma.

After Mr Furniss was picked as the best match he received injections to promote the growth of his stem cells.

The stem cells will be extracted from his blood and transplanted to Mackenzie, who has undergone intense chemotherapy to break down her bone marrow, stopping the production of more cancer cells.

Although stem cell transplants usually require an identical match – from a sibling – this treatment allows a half match from one of the patient’s parents.

The second stage of the treatment involves six trips to Germany where she will receive antibody treatment to try to make sure her father’s stem cells are not rejected.

Mrs Furniss, who is staying with Mackenzie at Yorkhill, said: “We are just looking forward to the treatment being finished.

“Mackenzie just wants it to be over now. It’s not a simple procedure, and we know it will take a while.

“Mackenzie really just wants to get back to normal and see her friends and go and play.”

Last month, she said  that it was a “natural decision” for both her and her husband to sign up for the transplant.

Dr Peter Lang who will oversee Mackenzie’s treatment in Germany, said last month, that although the procedure was risky, it had shown good results in the last few years.

He said: “This is a dangerous procedure for patients.

“We cannot say that it will work, and they will be cured but the aim is to get a cure for these patients. The study is still at an early stage, there are no final results yet.