A SCOTTISH art school dropout is inking up a storm with amazingly lifelike tattoos of celebrities.

Alex Rattray has a six-month waiting list of customers prepared to pay as much as £2000 to have customised, photorealistic images of the famous tattooed on their bodies.

Despite winning a place at the prestigious Edinburgh College of Art, Alex turned his back on a career in the mainstream art world.

Instead, he spends up to 13 hours a day in an Edinburgh studio creating works of art on clients’ bodies.

Favourite characters among customers include The Hulk and Joker from Batman.

The 33-year-old is part of a growing trend toward providing sophisticated, customised tattoos rather than off-the-wall studio designs.

His skills as an artist got him a place in 1999 at  Edinburgh College of Art, which counts Sculptor Sir Eduardo Paolozzi, painter John Bellany, and 2009 Turner Prize winner Richard Wright among its graduates.

He admitted: “I wasn’t really enjoying it so left in my second year. I had no idea what I wanted to do but the idea came to me as I was getting a tattoo.

“I took some time off and then set about getting an apprenticeship where I spent the first few years making tea before I was finally allowed to get to work.”

Alex, who takes anything from a whole day to five days to complete a tattoo, is booked solid until spring next year.

“You pay for what you get with tattoos. There’s a lot of studios out there that will take walk-ins off the street and just do whatever the customer wants.”

He added: “I’ve done loads of really fun work in all shapes and sizes and it’s really hard to pick my favourite but if I had to chose it would be the stormtrooper because it’s on my girlfriend.”

Alex is so painstaking when it comes to his work that a customer from the US had to go back home before his picture of Breaking Bad antihero Walter White was completed.

Despite a 13-hour session, the image on the man’s back was incomplete before he had to head to the airport.

He said: “It’s like a piece of art. You wouldn’t let a painting go unfinished and this is the same. It’s really grating. I will find him and I will finish it.” 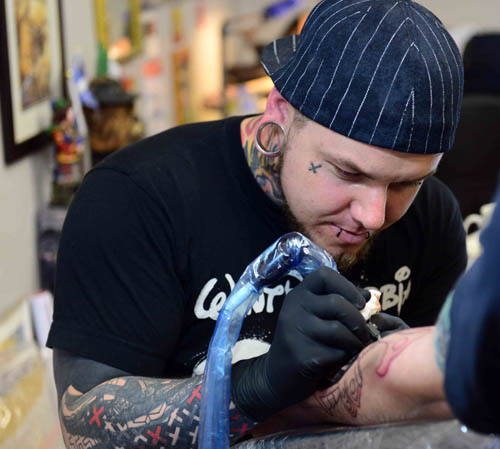