THE SCOTS creator of the “Ryan Gosling won’t eat his cereal” videos has revealed he has been battling cancer.

Ryan McHenry, who took the internet by storm earlier this year, has told of how only two weeks ago he had a cancerous tumour removed from his right leg.

Ryan is so well known and celebrated in the Us for his video hi-jinks  that fans have raised $10,000 (£6,300) towards his recovery in Scotland. 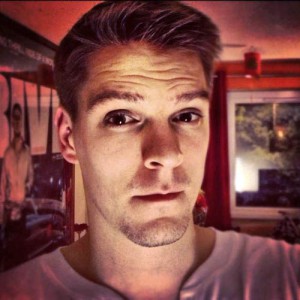 After being diagnosed with the disease in July, doctors told the 25-year-old there was a 50 percent chance they would have to amputate his leg – but they would not know until they had started to operate.

Mr McHenry, who was born in Dumfries, made short clips for video-sharing website Vine by holding a spoon up to the television screen and time Gosling’s on-screen gestures to make it look like he was refusing to eat cereal.

The clips were shared by millions around the world, including by Hollywood news company E!

In his latest video, posted yesterday – on Gosling’s birthday it shows The Notebook actor refusing to blow out his birthday candles.

Now the former Edinburgh College of Art student has revealed that he has undergone treatment to remove a cancerous tumour from his leg.

Mr McHenry was diagnosed with osteosarcoma, cancer of the bone, which had spread to his lungs.

Following his diagnosis, he decided to remain “positive” for his thousands of Twitter and Vine followers and posted a number of “cancer selfies” from his hospital bed.

He also made a new Vine showing Gosling push away a spoon holding the word “cancer,” while saying “do you wanna fight?”

Mr McHenry said: “Waking up was terrifying. I didn’t know if I was going to have a leg or not. I couldn’t feel anything from the waist down. In a daze, I had to ask the nurse if I still had my leg.”

Mr McHenry, who is popular in the United States, revealed that followers and fans of his work raised $10,000 for his recovery, and used the hashtag #weloveryan, to publicise their fundraising.

He said: “It was incredible. I was just sitting in my hospital bed just watching all this unfold,” he says. “The other really bizarre thing is, I’ve never really shown my face or become a character in front of the camera. All I’ve done is put a spoon towards a television.”

Mr McHenry has another 20 weeks of chemotherapy and is due to get an operation on his leg to clear him of cancer.

Despite having made 20 Vines in the Gosling series, the actor has still not replied. However, Mr McHenry said:  “The only conclusion I can see out of this whole thing is to have Ryan Gosling respond to this. Even if it’s just him eating cereal.”