A PENSIONER who helped hunt for a missing dog almost lost his own life after he slipped and fell into a river.

Noel Lock, 86, ventured into woods near his home in Glenluce, Dumfries and Galloway, to help look for the runaway pet.

But after the OAP – described by his own family as a “silly old bugger” – failed to return home, a frantic search was launched.

Mr Lock was discovered three hours later, freezing cold and “scratched to pieces”, in a ditch. 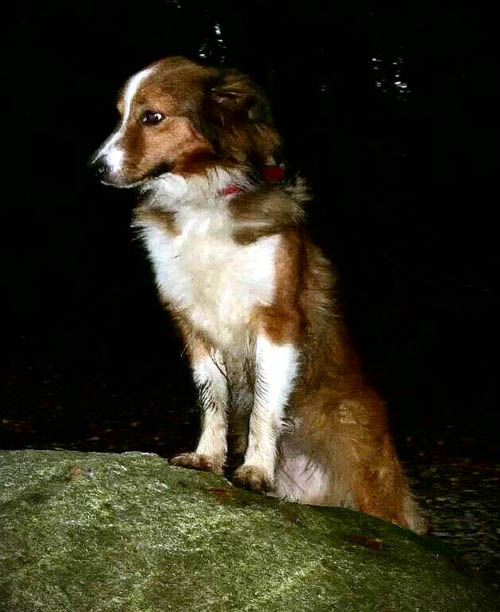 The kind-hearted pensioner, who has been recovering in hospital for the past week, slipped down a steep bank into a river.

He was then stuck in brambles as he tried to climb out and repeatedly fell back in before exhaustedly pulling himself to safety.

Mr Lock was looking for a Border collie called Skye, which ran away from its Manchester-based owners on October 22 while they were on holiday in the area.

Skye, a rescue dog, (pictured above) is hiding out in the woods around Glenluce and evading all attempts to tempt her back.

Locals have used traps baited with her favourite mackerel and even borrowed a thermal camera from local police.

And the search’s Facebook page has amassed more than 2,000 “likes”, including from Australia and Thailand.

Despite his advanced years, Mr Lock was determined to do his bit to help find Skye and headed into the woods on November 7.

His daughter, Karen Palmer, said: “My 86-year-old granddad went down to the Glen in Glenluce…to look for Skye. Unfortunately for us he never let anyone know where he was so a mini search party was raised for him when no one could find him.

“Over three hours later he was eventually found soaking wet after having fallen in the river several times.

“Needless to say after finding the silly old bugger soaking wet, scratched to pieces from brambles and very, very cold, he was admitted to hospital where he is now enjoying telling his tale of his ‘Bear Grylls’ like adventure.”

She added: “Thankfully he is okay, but he is disappointed that he didn’t find Skye.”

Skye’s owner, Carol Sinclair, 48, and her son, Luke, lost the dog in Monreith, 17 miles from her current hideout, when she slipped her lead and bolted.

She has taken unpaid leave from work as a police call handler.

Carol revealed that she had joined in the search for Noel.

She sent a message to the OAP saying: “I’m so sorry you hurt yourself looking for our baby girl and we’re so glad you’re going to be okay.”

She added: “When we find Skye we will bring her to see you. Thank you for helping us try find out beautiful girl.”

Carolyn Sheridan, who is helping lead the search for Skye, said: “We’ve been completely overwhelmed by the kind hearted nature of everyone involved and just want to thank them all for their efforts so far

“The whole town of Glenluce has been looking for her and we’re staying hopeful that we’ll find her.

“We’ve even had messages from Australia and Thailand.”

More than £800 has been raised in donations from animal lover to help fund the search efforts.