FOUR Scots law students have issue a grovelling apology for “blacking up” as Somali pirates on a drunken night out.

The students provoked international controversy after painting their skin black at a “beerienteering” event organised by Edinburgh University Law Society.

Professor Lesley McAra, head of the law school, has carpeted the unnamed undergraduates and issued a lengthy apology on their behalf. 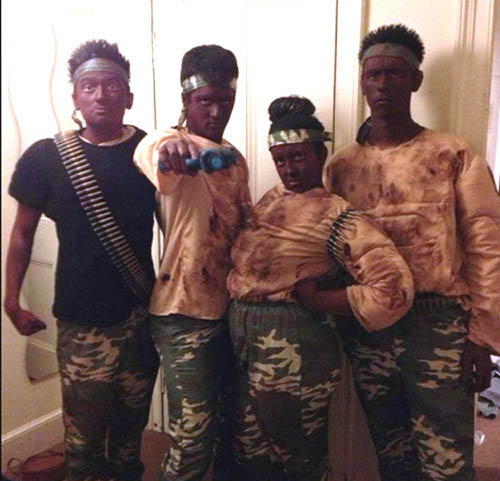 The students said: “We offer our unreserved apology to everyone for the offence our costumes have caused at the Edinburgh University Law Society’s Beerienteering event on Thursday 14th November.

“We apologise to members of the Law Society, the Law School and to the students at Edinburgh University. We also extend our apology to anyone who may have been offended by our costumes and the images in the media.”

The four insisted they had not set out to cause offence.

But they added: “After reflecting on our behaviour we now realise it was very insensitive and showed complete and utter disregard for the consequences.

“We recognise that our costumes did not meet the standard of dignity and respect required by both the University and society as a whole.

“In hindsight, we realise our costumes were poorly chosen, and this mistake will never happen again.

“We are taking full responsibility for our deeply regrettable behaviour and wish to do all we can to stress our apology.”

Prof McAra, an expert on the sociology of punishment and deviance, added in the email: “I will also be talking to student representatives about the lessons to be learned from this incident.

“As a School, we strongly value our diverse community. That is why we have taken this incident so seriously. It is not a trivial matter.

“I hope that we can now move forward in a spirit of inclusivity and mutual support.”

The incident led to immediate and widespread condemnation from other undergraduates at the university.

But discussion on the private Facebook page used by members of Edinburgh University Law Society clearly demonstrated that not all students accepted the idea that “blacking up” is offensive.

Edinburgh University yesterday (thur) declined to comment on whether the students had been formally disciplined.

But the incident could potentially harm the students’ future careers.

Asked for comment on the issue, the Law Society of Scotland – which regulates the legal profession – referred to their guidance for those applying to practice law in Scotland.

Applicants must declare whether they have been disciplined at university, and a board will consider if their application can go ahead.

On the application form which begins their legal career, they have to answer a question saying: “Have you ever been suspended, disqualified or had disciplinary action imposed on you by any professional or educational body, other than a school?”

The apology comes after students at Stirling University were condemned by their Deputy Principal for chanting a sexist song and appearing to make fascist salutes on a packed bus.

Four students at York University also found themselves at the centre of a row this week after they “blacked up” to look like characters from the film Cool Runnings, about a Jamaican bobsleigh team.