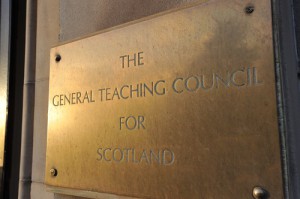 A PRIMARY school teacher is facing a disciplinary hearing after being accused of pushing a pupil and making him stumble.

Jeroen Van Der Kaay is also said to have shouted at the pupil and “took hold of his shoulders and/or neck” at Rowantree Primary School in Dundee.

The incident is said to have happened on 1 July 2011, when Mr Van Der Kaay was a newly qualified teacher on the Teacher Induction Scheme.

A General teaching Council for Scotland (GTCS) panel will consider a charge that he is “unfit to teach.”

The induction scheme is a one-year programme which provides new teachers with the year of work they need to become fully qualified.

Mr Van Der Kaay is alleged to have “acted inappropriately” towards an unnamed male pupil.

The charge says he “shouted at him, physically took hold of his shoulders and/or neck as he got up from his chair.”

He is also said to have “ushered him towards the door of the classroom, and pushed him causing him to lose his balance and stumble.”