One Direction give £20K Xmas toybox to Scots cancer kids

THE mother of One Direction heartthrob Zayn Malik has organised a £20,000 Christmas “toybox” for a Scottish children’s cancer ward – paid for by the band.

Tricia Malik got her son and his bandmates to dip into their own pockets to fund a box of goodies for youngsters in the oncology ward at Ninewells, Dundee.

The gifts from the boys are expected to include toys, signed merchandise and dozens of VIP tickets for one of their shows. 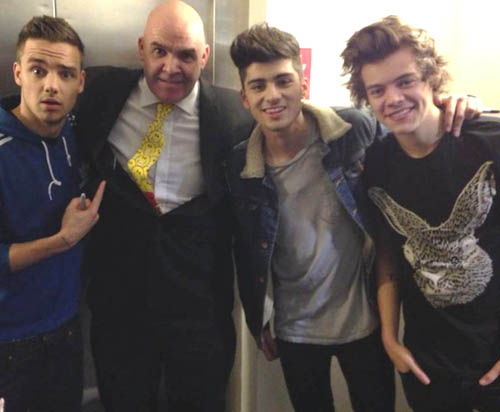 It is the second year Tricia has organised for the band to play Santa but their involvement has not previously been reported.

Dundee fundraiser Charlie Kean (above) got in touch with Tricia to see if Zayn, Harry Styles, Niall Horan, and Liam Payne could help out.

But Charlie said the contents of the toybox would not be revealed until December 25.

“We’re quite excited to see what’s in it,” he said, “but that’ll be kept a secret until the big day itself.

“It’s amazing that they’re getting involved and helping give that little bit of hope to desperately ill children on the ward and I’m sure they’re going to be over the moon.”

Charlie said the estimated value of last year’s box was around £20,000.

“Last year’s box was just filled with toys, like dolls and cars, for the kids on the ward but there was also like signed programmes and merchandise for them.

“We were the only charity to get tickets for their SECC gig directly from the band and the array of emotions from the children that went was unbelievable. I don’t think they’ve ever been as happy or excited.

“Those VIP tickets can go for up to £500 each and we got more than 30 so it’s just so generous of them to help the children in this way.

“For some of them it was all their dreams coming true at once.”

He added: “I do make sure all the kids write their thank you notes to Tricia though because it’s only polite and lets her know that her work is going to a really good cause.

“Trisha, is an amazing person for helping coordinate this all and even though those tickets were meant for friends and family she wanted to help us instead.”

Tricia said: “It’s amazing to be able to see what a big difference these toys and gifts are making to these kids’ lives.

“It’s such an amazing cause to get be involved in and the fact that I actually see how it’s changing their lives makes it all the more worthwhile.”