A SCOTS celebrity couple have spoken of their terror after being rescued from their home following a horrific fire in their stairwell.

Zedd and Saffire, otherwise known as Craig and Debbie Stephens, thought they were going to die when their Edinburgh home was engulfed by smoke.

Three fires broke out within the Portobello area of the city within an hour of each other on Sunday night. 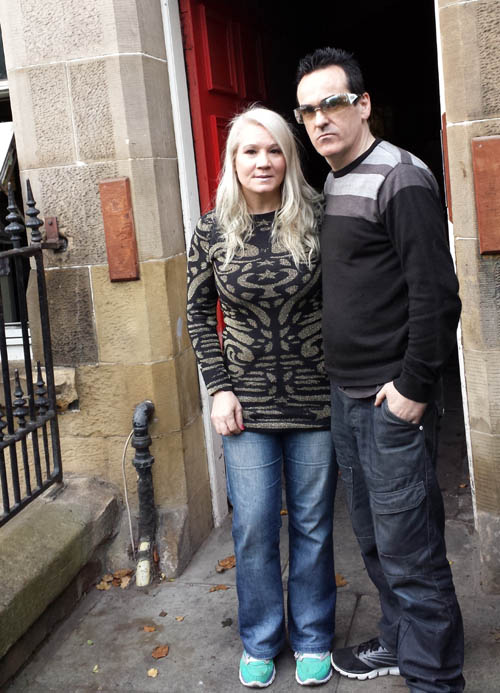 The singing duo, known for their appearances on TV shows such as Britain’s Got Talent, were at home in Bath Street, Portobello with their two children on Sunday evening and were just settling down to watch X Factor.

The couple noticed a smokey smell in their third-floor flat, and initially thought it was coming from another fire.

After being alerted by a neighbour the family of four tried to leave escape from their third floor flat but were forced back inside by “thick, chocking black smoke”.

After screaming for help from their living room window, firefighters lifted the couple’s 16 and 18-year-old sons to safety using a cherry picker,  saving the two family cats at the same time.

Two fire fighters then broke through the couple’s front door before carrying them out down the stairwell.

Ten people were evacuated from the block in the Portobello area on Sunday evening and although no one required hospital treatment all were given oxygen at the scene.

Speaking from his home today, Zedd, 44, said: “It was absolutely terrifying and we are just so thankful that the fire service was already nearby.

“Time was really of the essence and things could have turned out much worse.

“It’s a mixed block of flats with a fair few families with young children so whoever did this must be caught for endangering people’s lives.”

Saffire, who firefighters say took the brunt of the smoke inhalation, said she thought they were going to die.

The 49-year-old said: “When we realised we were trapped I really started to panic. We all ran into the living room and we shouting out the window to the fire brigade to help us.

“Our youngest was screaming ‘please help us, I don’t want to die’ and he even tried to climb out the window.

“The two boys went down first with one of the cats while we ran around looking for the other one.

“We found her in the back room and zipped her up inside a suitcase before she was hoisted down too.”

Saffire added: “The smoke has destroyed everything, there’s soot everywhere.

“When I looked down the stairwell during the fire I couldn’t see anything at all. It was pitch black and terrifying.”

Investigators are still trying to determine if the fires were started delibarately, but the couple blamed the blaze on “mindless thugs.”

The flat’s hallway was left in darkness today with a strong smell of smoke still lingering in the air.

Walls and doors throughout the block have been left with a thick layer of soot and shocked residents were still attempting to scrub their properties clean.

The lush cream carpet inside the musical duo’s flat was left blackend by the smoke damage and the walls were tinged black.

Saffire was left with soot covered hair and skin after opening the properties front door to investigate and had to be treated with oxygen for an hour by emergency crews.

Zedd, 44 and Saffire rocketed to fame as a celebrity couple after appearing on several reality TV shows such as Britain’s Got Talent and Got To Dance.

They live in their Portobello home with their two sons Kurt, 16, and Craig, 18.