WATERSTONES have made a spoof video advertising their new “owl delivery service” just days after Amazon reveal their plans for drone deliveries.

The bookshop chain released a video in which their “Press Manager”, a Mr Jon Owls, lays out plans for their new cost-effective system.

The suspiciously named Mr Owls says that the Harry Potter-esque idea will see a fleet of owls work individually or as an “adorable fleet” to deliver books to customers within 30 minutes. 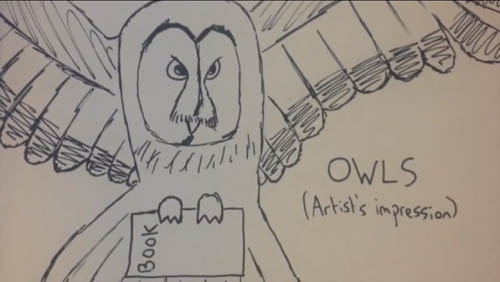 Waterstones website has a small Frequently Asked Questions section on the idea which compares their ideas to JK Rowling’s boy wizard novels and Alfred Hitchcock’s film, The Birds.

Amazon revealed on Sunday that they are planning to introduce a drone delivery service which could be in place as early as 2015.

Now Waterstones have revealed their tongue-in-cheek plans to rival their competitor’s idea.

In a video posted to their YouTube page night which has been viewed around 10,000 times so far, Mr Owls reveals a ‘sketch’ of their latest plan.

However, he says that the new fleet known as the Ornithological Waterstones Landing Service (O.W.L.S) will not be available for a while as it “takes ages to train owls to do anything and we only just thought of it this morning.”

On the chains website, an FAQ section has been set up to deal with customers enquiries about the service.

While another says: “Will the owls be treated humanely?” The reply reads: “Yes! Our owls will be loved by specially trained booksellers who will regularly feed the owls with love, affection and mice.”

One of the FAQ’s asks about the cost of the service, to which Waterstones say will be “cheaper” than standard delivery and say that they will only charge £2.75 depending on inflation.

Customers obviously expressed fears over the idea, as one question asks “Isn’t this how Alfred Hitchcock’s The Birds began?” before going on to talk about “sky-based revenge” by the owls.

However, Waterstones were able to settle this by saying that “The Birds is fiction, this is the real world” and that the owls are “incapable of harming a human” due to the “laws of robotics,” before quickly ending the FAQ.