A SCOTTISH show dog who was stolen from her home by thieves almost seven months ago has turned up more than 500 miles away.

Annah the Shetland Sheepdog – who is so well-bred her pups are worth £800 – was secured outside her country home near Cupar, Fife, when thieves crept in through a broken fence and took her.

The six-year-old’s owner, Leanda Loosemore, launched a desperate appeal to reunite the pet with her young family and word quickly spread across the country. 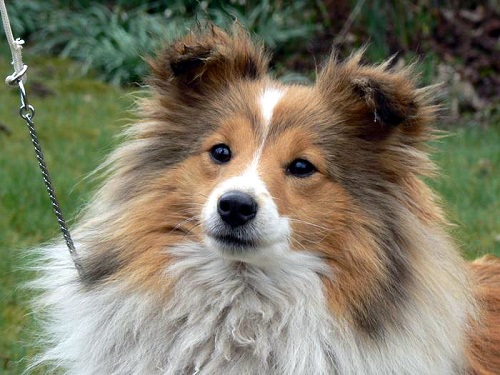 But just as the 25-year-old was beginning to give up hope of ever seeing the dog she received a shock phone call.

A bedraggled and overweight Annah had been found wandering the streets in Kent by council workers and is now being looked after by a breeder until she makes the long journey home.

Miss Loosemore said she “never thought I’d see her again” and she “can’t wait to bring her home to the kids in time for Christmas”.

A beloved former show dog who was taken from her home more than seven months ago has been found an astonishing 521 miles away in Kent.

After being dumped by the thieves that took her, Annah was picked up by council workers and taken to the local pound where she was traced back to Scotland through her microchip.

Leanda, a mother of two, said: “I can’t believe she’s turned up and I honestly have no idea exactly how she ended up that far away.

“The fact she turned up after almost seven months makes me think two things though. She’s either escaped or after trying to breed her they’ve given up because she’s a tricky one.

“After we stopped showing her we let her breed and she’s produced pups that have been shown at Crufts and are sold for around £800 so that could explain why they took her.

“But she was always more a member of the family and we decided to keep her as a pet because the kids love her.”

She added: “Annah was in a bit of a state when she found with her matted fur and she had gotten really quite fat but she seems as healthy as I can hope for.

“I’m definitely never letting her go again and the kids are so chuffed she’s home. She’ll make the full journey back home in a couple of weeks, just in time for Christmas.”

Annah was taken from her home in May this year, gaining access to the kennels through a broken wall.

Leanda said: “We usually keep all our show dogs in the house but a car had crashed into the side of it and it was being rebuilt so they were housed outside.

“My gran left four in there at night and when she went back in the morning there were only three.

“No one had seen her for months but then we go that call at the end of last month saying she had been found wandering the streets.

“It’s now a waiting game until she gets home for good but we’re all so excited.”