SUSAN Boyle was today unveiled as this year’s Chieftain of the British Pipe Band Championships.

The Scots singer was in Bathgate where she was officially given the honorary position which will see her head up this year’s annual event.

Boyle from Blackburn, West Lothian said that she had been “gobsmacked”  and “honoured” to be offered the position. 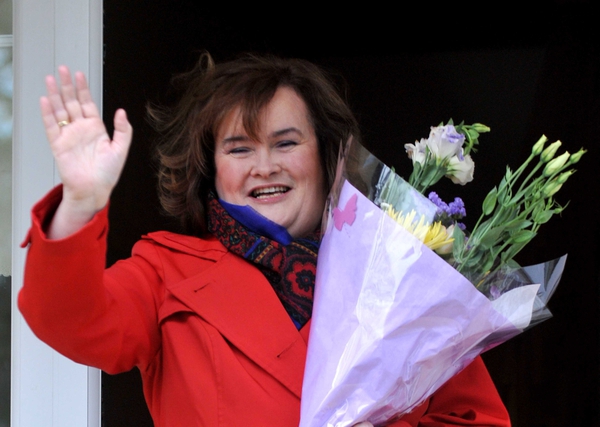 More than 4,000 pipers and drummers from across the UK are expected to descend on West Lothian in May where the championships will be held for the second time in a row.
The role will see Boyle meet with competing bands, and hand out awards to those recognised for their playing.
Posing with a set of bagpipes Boyle said she was “all in a tuffle” as she tried to get to grips with the instrument.
The West Lothian Schools Pipe Band were also in attendance at the championships launch.
They will be one of 140 bands that will play at the event on May 31 at Bathgate’s Meadow Park.
Councillor Tom Kerr, Provost of West Lothian council said that it was great to have Boyle’s support for this years event.
Boyle said: “I’m absolutely gobsmacked and very honoured. I found out a while ago I was going to be chieftain but I didn’t believe it until now.
“I’m looking forward to it very much. I just want to continue making people happy.
Asked if she liked bagpipe music and if she had a favourite tune, Boyle responded:”I should do, coming from Scotland. It goes without saying really. I like it all.
“I used to go to the Highland games when I was younger. I think it’s very important to go back to your roots and coming back home is very important to me.”
Councillor Tom Kerr, provost of West Lothian Council said: “It’s a real coup for West Lothian to host the British Pipe Band Championships and we are very excited about the event for 2014 and of course welcoming West Lothian’s very own Susan Boyle – it’s great to have her support for such a prominent event for the region. We are very much looking forward to welcoming bands and visitors from all over the world to West Lothian.”

Matt Purdie, President if the West Lothian Highland Games said: “We are really looking forward to hosting the British Pipe Band Championships in West Lothian for the second year running and it is a great honour to welcome Susan Boyle on board as Chieftain for 2014.”

Susan will kick off her UK tour in Liverpool in March before returning to Bathgate for the championships.
The piping championship will be run alongside this year’s West Lothian Highland Games, which includes a host of traditional activities such as the caber toss and highland dancing.
It is thought that more than 8000 visitors from across the world will flock to West Lothian at the end of May to take part in the joint celebrations.
Share
Facebook
Twitter
Pinterest
WhatsApp
Linkedin
Previous articleBeating aggression makes bacon better
Next articleScotland’s most lucrative mobile speed cameras rake in £250,000

Subo reveals she is set for world domination