A CANCER patient who was helped by generous Scots to fulfil her “bucket list” dream of seeing her daughter get married has died.

Michelle Sharkey, from Dundee, was able to enjoy the big day on December 4 last year after friends, businesses and total strangers donated everything from the dress to cars.

The grandmother of three, who was diagnosed with advanced lung cancer on her 47th birthday last August, passed away on Monday.

Mrs Sharkey sat down with her family the day before and told them: “Thanks for everything – I will always love you all.” 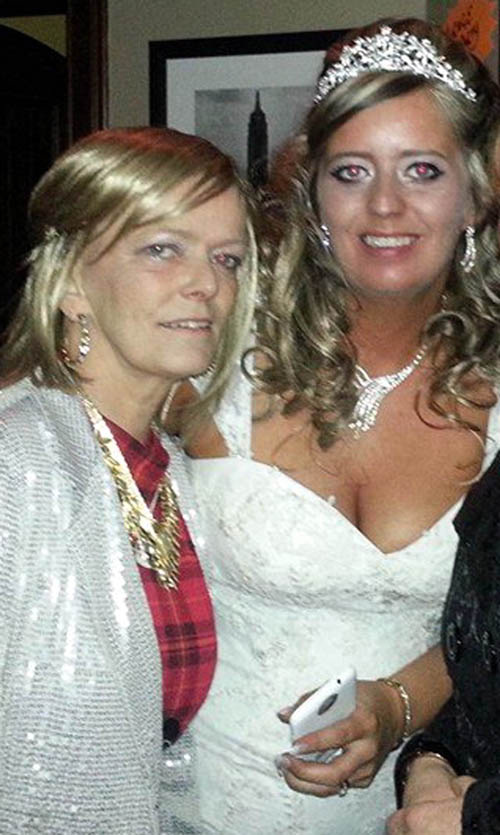 Mrs Sharkey feared she would not live to see Christmas 2013 so her daughter, Cheryl, 26, brought her planned wedding forward.

She and boyfriend Kevin appealed for help in making the day special and were overwhelmed to receive flowers, food, dresses and even the venue.

Strangers from across the country helped plan the wedding and in just three days almost everything had been organised for the ceremony at Le Mirage in Dundee.

Cheryl said: “My mum died on Monday morning. She had been staying at my gran’s house and I was there taking care of her.

“We kind of knew the time was coming because yesterday she sat me down and said thanks for everything and that she would always love us all.

“I took her a cuppa and she was still kind of mumbling away in bed but when I went back up 40 mins later, she had gone.”

Doctors gave a prognosis of just two to three months last year but Michelle was determined to keep fighting the crippling disease.

Cheryl added: “It was her time to go really. She had been so strong holding on for us all but she didn’t need to suffer anymore.

“She got to see me and Kev get married and that’s all she really wanted in the end.

“She had pushed it and pushed it. She was so determined that this disease wasn’t going to beat her.

Mrs Sharkey’s funeral will take place today at Our Lady of Sorrows Church in Dundee.

Cheryl said: “We had already discussed what she wanted the funeral to be like so we’ve managed to arrange it really quickly.

“I haven’t told my son yet, which is going to be really difficult, but we know Mum died happy.”