SCOTS twins who died fighting the Nazis on the same day 70 years ago will have their story told using the latest mobile phone technology.

John and Thomas Cairncross, from Newburgh, Fife joined the army on their 19th birthdays and were sent on Operation Shingle, the landings at Anzio, just south of Rome.

The brothers’ tragic tale only came to light when schoolchildren at the same Fife town discovered two of those listed on a war memorial had the same surname. 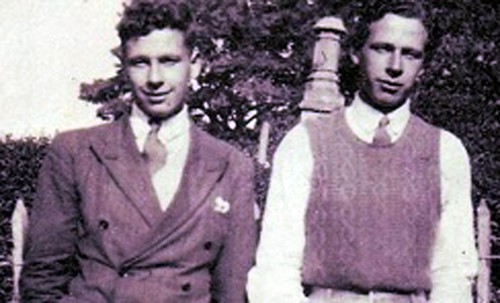 Now their story will be brought to life using interactive panels installed at Anzio and Beach Head cemeteries which use QR codes to provide information to visitors’ mobile phones.

Scanning the information panel at the cemetery will take visitors to a microsite, which shows a picture of the twins and a retelling of their story.

A spokesman for the Commonwealth War Grave Commission, which is installing 500 such panels around the world, said: “You’re able to put a human face on a headstone.

“Our focus is less on their military service but on their personal life.

“The twins’ story is tragic but moving.”

The twins are among the first soldiers of the Second World War to have their story retold in this way, after schoolchildren from Newburgh uncovered their family connection while researching the local war memorial for a British Legion project.

John and Thomas enlisted as privates in October 1943 and joined the London Scottish Regiment.

They were sent to Italy in 1944 and were among 36,000 troops who took part in the Operation Shingle landings at Anzio. The Allies were trying to outflank the German forces blocking the Allied advance from the south.

On 4 February 1944, the London Scottish Regiment found themselves under fire from a German Panzer division.

It is not known which twin died first, but one lost his life in the village of Carroceto and the other died nearby.

Survivors said one of the brothers vowed vengeance after his twin died.

A London Scottish Regiment veteran, Private Robert Cunning, later wrote: “One of the brothers was killed and the other determined to take revenge on? the Germans who killed his brother.”

CWGC Commissioner Robert Fox said: “The cemeteries and memorials created and maintained by the CWGC are of huge historical significance, but they are also deeply moving on a personal level.

“The CWGC’s innovative use of technology – and our interactive Visitor Information Panel programme in particular – help to tell the extraordinary story of the sacrifices made by Commonwealth servicemen and women in the Italian campaign.”

Thomas the missing moggy comes back home after eight years