CHICKEN poo and seaweed are the natural solution to getting a bumper crop from your garden say researchers. 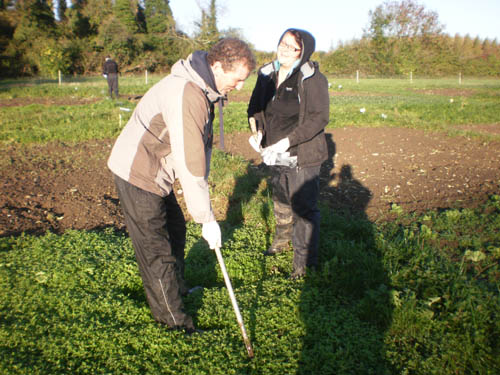 The SRUC team say they have an extra benefit by encouraging the growth of fungi in the soil.

In a gruesome, subterranean battle, the fungi penetrate the bodies of maggots, destroying them from the inside out.

Gardening remains one of Scotland’s favourite pastimes and waiting lists for allotments can be as long as nine years in some parts of the country.

But concern has been growing about the harmful effect on the environment of insecticides, including recent research which suggested exposure to chemicals made bees shrink.

Researchers at the SRUC believe that chicken poo and seaweed dug into Scottish soil can increase the number of “good” organisms to levels higher than those found in the Amazon Rain Forest.

Professor Bryan Griffiths and his team, who are based at Roslin, Midlothian, looked in detail at the problem of the cabbage root fly, one of the most prolific pests in Scottish gardens.

He said: “For home gardeners there is no chemical pesticide available for this particular problem making controlling this pest incredibly hard.

“The cabbage root fly smells the plant, whether it be brocolli or swedes, and lays its eggs on it.

“When the maggot hatches it burrows to the root where it starts to eat the plant and in the end kills the plant.”

Professor Griffiths added that this cycle can go on for two to three generations a year – proving a costly loss for whoever is growing the crops.

But changing the nature of the soil with seaweed and chicken manure encourages the growth of maggot-munching fungi.

“What we’re trying to do is readjust the natural levels in the social to more organisms, some which will be predators like the ground beetle, who eat the cabbage fly, to come to the affected area.

“It’s got to become a bug eat bug world if you want your crops to be of a high quality.”

“By enhancing the natural control, we can reduce the losses felt by both amateur gardeners and indeed commercial growers who are losing vast quantities of each crop to pests every time round.”

Professor Griffiths added: “Soil has been referred to as the ‘poor man’s tropical rainforest’ because the level of organisms found in good soil is often higher than the number of organisms in the Amazon.”

Wannabe grocers can find themselves waiting between four to nine years for an allotment in Edinburgh as more than 2000 wait for their own piece of land.