Sign for Glencoe massacre returned 40 years after it went missing

A SIGN marking the site of the Glencoe massacre is being returned 40 years after it went missing – thanks to three members of the MacDonald clan.

Three sisters saw a cast-iron sign in an Edinburgh antique shop and confirmed it was the same one they had posed against in Glencoe in the 1960s.

The chance discovery meant that the marker will next week be restored to its proper place in the Highlands – on the 320th anniversary of the massacre. 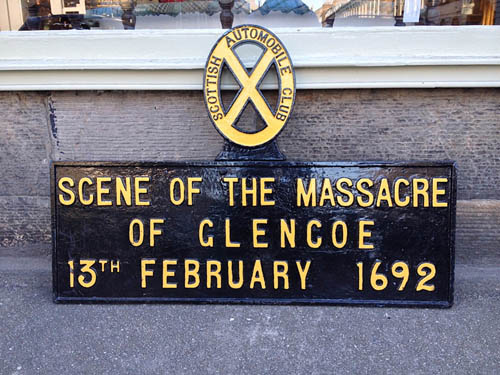 The sign disappeared in the early 1970s and, for reasons which remain unclear, ended up in George Pirrie’s antique shop in the capital.

Mr Pirrie said the sign was sold to in September last year him by someone who had it in their possession for “several years”.

It was obviously suspected that the sign had been taken from the site but it was not until a chance visit in December that the issue was settled.

Mr Pirrie said: “We had the sign on display in the window and the ladies had heard about it.

“So they came down to see if it was the same one that they had had their picture taken with in the 1960s.

“We peeled away a small bit of paint on the corner and realised it was a different colour but was definitely the same one.

“They couldn’t quite believe that it had been found and were immediately keen on putting it back.”

The sisters left Mr Pirrie with a copy of the picture of them posing by the sign but did not leave their own details and so their identity is currently a mystery.

He was then contacted by the head of the MacDonald clan who was keen to restore the sign.

Mr Pirrie said: “With this industry these exciting finds happen from time to time but this one is really quite significant.

The sign was originally gifted by the Scottish Automobile Club.

Mr Pirrie added: “We were approached by quite a few people who wanted to buy it but we refused because we had been contacted by the Glencoe National Trust who were keen to get it back.”

Now the antique dealer will travel to a special private ceremony in Glencoe next Thursday where he will gift the sign back to the clan members.

On February 13, 1692, a slaughter began in the glen after the MacDonald’s invited their rivals the Campbells into their homes as a bid of good faith.

But in the middle of the night, the murder began when Campbell militiamen killed 38 MacDonalds as they slept.

A further 40 women and children also died after their homes burned to the ground and they were left exposed to the bitterly cold weather.

The massacre is commonly known as the “most appalling abuse of Highland hospitality”.

A spokeswoman for the National Trust of Scotland said: ““The tragic events that took place in Glencoe so many years ago still resonate with many today, and should not be forgotten.”

SNP MSP for Skye, Lochaber and Badenoch, Dave Thompson said: “I am delighted that after 40 years the commemorative sign has now been found and will be restored to its original place in Glencoe to commemorate and remember the men, women and children who lost their lives that night.

“We Scots have a rich and varied history and it is right and proper that we remember all aspects of it.

“I hope that this time, the sign manages to stay in place.”