A LIVE otter, an outboard motor for a boat and an Action Man figure are among some of the strange items fished out of Scotland’s sewers.

A Scottish Water worker even found his credit card, which had been stolen in a pub and flushed down the toilet, turn up in the screens at a sewage works.

The bizarre finds come as Scottish Water announces drains and sewers were blocked 40,000 times last year, with 80% caused by people putting the wrong things down their sinks and toilets. 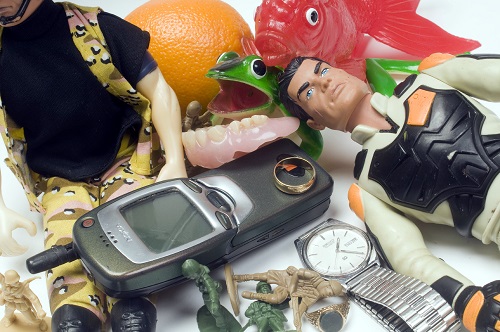 The blockages have caused repair bills of more than £7million, and the publicly-owned company is now launching a campaign to inform customers on what they can flush away or put down the sink.

Cooking fat, oils and grease coupled with bathroom waste such as cotton buds, nappies and baby wipes are the most common reasons for blockages.

These create “fatbergs” of solidified fat which block drains, cause floods and can damage the environment.

But even stranger items turned up in the pipes.

One Scottish Water worker from Dumfriesshire, who has since retired, was amazed to find his credit card in the screens at a sewage plant after having it stolen in a pub.

The live otter turned up in a ditch at Dornoch water works in the Highlands north of Inverness, and a live badger was found in a pumping station in Drongan, near Ayr.

Other animals did not survive, with a dead sheep and a dead cow also being found – and the cow’s owner was able to be traced thanks to a tag on the animal’s ear.

An Action Man toy which still had its boots on, toy soldiers and An outboard motor for a boat also turned up in the sewers.

Chris Wallace, Director of Communications, Scottish Water, said: “The waste waterdrain which runs from your house to the public sewer is usually only about four inches wide, which is less than the diameter of a DVD.
“This drain is designed to take only the used water from sinks, showers and baths and pee, poo and toilet paper from the toilet.

“Scottish Water believes the best way to tackle blocked drains and sewer flooding is to work with our customers to prevent blockages that can clog up the cycle in the first place.”

A seven-week advertising campaign reminding customers what they can put down the drains is to launch today.

The ‘Keep the Water Cycle Running’ campaign asks customers not to keep the tap on while brushing their teeth, as this can waste up to 26 litres of water a minute.

Mr Wallace added:”Although Scotland has plentiful resources of raw water, the treatment and distribution of water is very energy intensive and the heating of water counts for a sizeable share of energy use.

“Research by the Department for Energy and Climate Change shows that 18% of domestic energy is used for heating water.

“By using lesswater you can save money – and with high energy prices it makes good sense for Scots to use water wisely.”