An appeal has been launched for Scotland’s curry-loving pioneers to help celebrate a keynote anniversary at one of the country’s best know Indian restaurants.

Khushi’s – famed as the first Indian restaurant in Scotland when it was launched in 1947 – is looking to track down original customers from the time of its opening to share their dining experiences as well as their photographs and other mementos from the period.

The nod to nostalgia is part of a series of events to mark the 80th birthday of co-founder Hamida Khushi, which will culminate with the restaurant travelling back in time to offer diners a chance to taste some of the original dishes from 67 years ago at a unique ‘Back to 1947’ event. 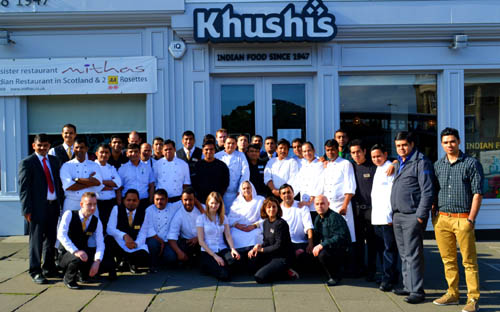 And those customers who can show they were among the first to try curry in Scotland or can supply original pictures or menus from the opening time will be invited to back to have a free meal at the event.

General Manager Jaimon George said they want to collect as many links with the past as possible to show how the restaurant and the Indian dining experience in Scotland has flourished over the last five decades.

He said: “Khushi’s is now an Edinburgh institution but it took a bold step by customers in those early days to try Indian food for the first time to help start us on the journey to where we are now.

“We want to find those early curry pioneers to invite them back to Khushi’s for this special event.

get a proper taste of how it all began.

“It will also be a great way to help us celebrate Mrs Khushi’s milestone birthday in style and embrace Khushi’s nostalgic past with both new and returning customers.”

The first Khushi’s restaurant was opened in Edinburgh’s Potterrow by Khushi Mohammed, a penniless Indian immigrant who arrived in Britain in the mid 1930s after being lured by the Commonwealth promise of work and a better life. The restaurant quickly became popular with the city’s growing Asian community, many of whom were studying at nearby Edinburgh University, as well as attracting food lovers looking to try new cuisines.

The now-demolished Potterrow restaurant gave way to various locations until, in 1974, it opened in Drummond Street with Khushi’s wife Hamida, replacing him in the kitchen, before son Islam Mohammed took over the business in 1989 and oversaw the move to Victoria Street.

A fire in 2008 destroyed the Victoria Street venue but the business bounced back with the opening of a new flagship restaurant in Antigua Street and its Leith fine-dining restaurant Mithas.

Jaimon added: “Our customers and the local communities have been at the heart of our business since 1947 so being able to see and hear their memories of the past will be fantastic.

“Over the decades, we’ve served people from all walks of life, from lawyers to homesick students – in fact in the early days we used students from Indian sub-continent as ‘spice mules’ to bring in rare ingredients from their trips back home.

“We believe many of our original customers will have a connection with Edinburgh University, given both its close location and the fact that students were tempted to try curry for the first time.”

Customers who can prove they visited the original Khushi’s or have photographs of the restaurant can either hand them in to the restaurant or send to Khushis restaurant, 10 Antigua Street, Edinburgh EH1 3NH or send to [email protected] (FAO Jaimon George) where arrangements can be made for their free meal.