A HEAVYWEIGHT MSP is putting himself on an “extreme” diet in a bid to cure his diabetes.

Holyrood veteran Colin Beattie is giving up his beloved steak pies to take part in the experimental diet which restricts him to just 800 calories-worth of vegetables and dissolvable “nutrition packs” a day. 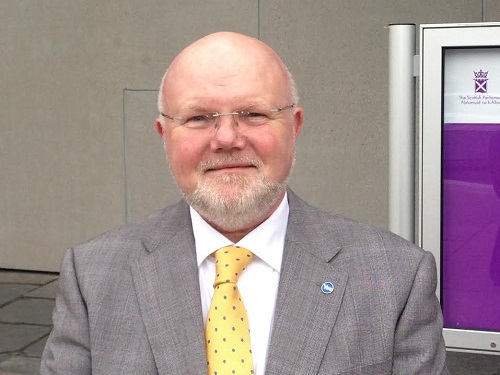 The 62-year-old Nationalist politician wants to drop from is determined to drop from 90kg (14 stone) to around 74kg (11.5 stone) in just two months.

The Midlothian North and Musselburgh MSP said: “I’m about to take on the University of Newcastle diet – in 66 days it cures you.

“You take in very very low levels of calories, it allows the insulin to kick back in.”

Beattie has suffered from Type 2 diabetes for around three years, and hopes the diet will cure him of the need to use medication.

He said: “I felt great before they diagnosed it, it makes no difference to my life but now I’m a little bit careful about what I eat.”

Described as an “extreme low calorie diet,” participants only consume 800 calories a day compared to the recommended amount for adult men of 2,500.

He says he will have to give up on “steak pies and almost everything that makes life worth living.”

“But this is what happens if you abuse your body,” he added.

It was rumoured last year First Minister Alex Salmond had turned to a diet favoured by pop sensation Beyonce in a bid to drop the pounds.

But Beattie joked: “Maybe I should phone Alex Salmond and tell him his Beyonce diet is for wimps.”

Beattie, 62, will also have to stay teetotal throughout the 66 day diet, but hopes others will take up the diet to fight the “epidemic” of diabetes in Scotland.

The former leader of Midlothian council’s SNP group is keen to shed the pounds ahead of the independence referendum, where there will be “a lot of activity” going on.

He is currently in discussions with his GP to ensure the diet will be safe.

Professor Roy Taylor, who carried out the research which led to the diet, wished Beattie well but said research was ongoing into the low calorie alternative.

“Maybe he will stay in Parliament for another 10 years.”

The diet enters the body into “fasting mode,” he said, which removes fat and allows insulin to be produced again.

Beattie spoke after his constituency of Musselburgh imposed a weight limit on candidates for its ceremonial role of “honest lad” and “honest lass.”

The winners, who are decided by public vote, become unofficial ambassadors for the East Lothian town and must ride a horse around the town in a special ceremony.

The Honest Toun Association said it introduced the 16 stone limit due to concerns over horse welfare.