THE BATTLE of Bannockburn has been recreated in a grisly new 3D graphic novel.

The graphic novel, written by a top historian, shows the gruesome moment Robert the Bruce killed an English knight at the start of the battle – annotated with the word ‘skluddd’ as the king slams an axe into his head.

‘On Dangerous Ground’ will be available at the site’s new visitor centre as it prepares to celebrate the 700-year anniversary of the battle which won Scotland its independence.

Robert the Bruce and King Edward II feature in the story, as does the key scene when Bruce slayed Sir Henry de Bohun, giving the Scots a much-needed morale boost at the start of the battle.

The knight tried to kill Bruce by charging at him with a lance but the Scots leader was able to dodge the lance and kill the attacker with a blow from his axe.

Tom Ingrey-Counter, Interpretation Project Manager at the National Trust for Scotland said: “The concept behind the Battle of Bannockburn graphic novel is to use an exciting, popular and relevant modern medium to engage the public in the story of Bannockburn.

“This is in keeping with the new Battle of Bannockburn visitor centre as a whole, where we are using state-of-the art 3D technology to immerse audiences in medieval battle.

“We have worked with members of a dedicated academic panel to develop all the new interpretation, including the novel of which panel member Dr Fiona Watson is the sole author. 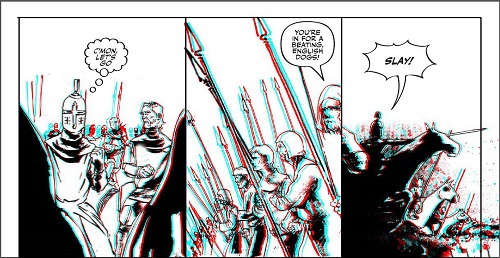 “This has enabled us to create compelling fictional characters and tell stories in a dramatic and theatrical way, whilst maintaining a high standard of historical integrity in everything.”

He continued: “At the centre you will meet a mix of famous knights as well as those of more lowly status: men, women and children whose lives were never recorded.

“From a female spy to a Scottish spearman, the story of the battle is told from many interesting perspectives.

“The graphic novel centres on the fictional character of Eva, an ordinary ‘girl from next-door’ who chooses to shape her own destiny in the chaos of battle.

“So, if you don’t think history is for you, the new interpretation of the Battle of Bannockburn all launching this year in time for the 700th anniversary has the vision to change your perspective.”

Adam Stanning, director of design company Bright White, which was also responsible for the work on the new Bannockburn Visitor Centre, said: “The talent within the team is immense; Fiona Watson’s incredible writing and knowledge on the subject, Conor Boyle’s exceptional artwork and Jim Campbell’s meticulous lettering.

“Couple all of that talent with the hard work that has been going on here at Bright White Ltd to coordinate and bring colour to the story and the resultant graphic novel is unrivalled in the interpretation world.

“I really cannot wait for it to hit the shelves so we can finally share this collection of talents with the world.”

On Dangerous Ground: Bannockburn 1314 will be available at the new shop at the Battle of Bannockburn Visitor Centre priced £14.99.