Deadline News
Home Uncategorized Hospital staff mislabel, misplace and mishandle cadavars
Facebook
Twitter
Pinterest
WhatsApp
BUNGLING hospital staff have been accused of “sheer negligence” after more than 40 dead bodies were ‘mishandled’ by the NHS over a five year period.
Scotland’s second largest health board NHS Lothian was forced to launch an investigation after it accidentally released the wrong body to a funeral home in 2013.
In April of the same year NHS Grampian hit the headlines when a cadaver was found in the back of a van that had been sent to a garage in Aberdeen for repairs. 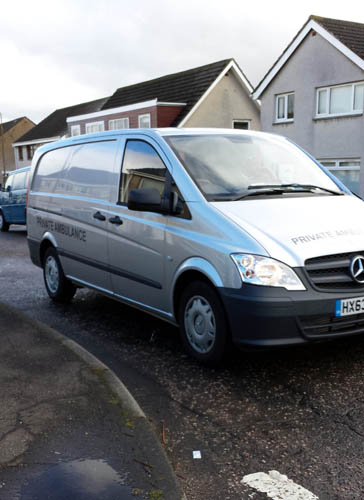 And a  further three health boards admitted “mislabeling” dead bodies on several occasions, racking up 41 errors over the five year period.
Margaret Watt, chairwoman of Scotlands Patients Association slammed the health boards, saying the level of negligence “should not be tolerated”.
A Freedom of Information request revealed that health boards across the country have repeatedly made serious errors when handling dead bodies.
NHS Forth Valley appeared to was the worst offender recording 31 mistakes since 2009.
Across two hospitals in the region, 17 bodies were found without any identification labels.
One body was removed from the mortuary at Forth Valley Royal Hospital, in Larbert, Falkirk, between January and February this year without any record of it being taken.
NHS Tayside made six errors over the years including receiving one body with no identification on it in 2009.
And NHS Fife admitted to mislabeling a body at the Victoria Hospital in Kirkcaldy in 2012 and one at Queen Margaret in Dunfermline in 2010.
Accidentally released
NHS Lothian recorded one incident where a body was accidentally released to a funeral director in West Lothian due to a drawer mislabeling. It was returned within the hour.
Grampian health board hit the headlines last year after a body was found in the back of a van sent to a garage for tail light repairs.
The remaining health boards claimed to have had no incidents over the same time period.
Margaret Watt from Scotlands Patients Association blasted the figures, saying: “Even two is too many. These kinds of careless mistakes are damaging peoples trust in the NHS.
“There shouldn’t ever be a wrong name tag on person’s foot. It’s just adding to the stress of a family who have already lost their loved ones. It’s absolutely obscene and disgusting.”
Obscene and disgusting
Conservative Health spokesman, Jackson Carlaw agreed and said: “Some of these cases almost defy belief.
“At a time of loss, families and loved ones are relying upon the NHS to look after a deceased loved one with care and sensitivity.
“Health boards need to urgently re-examine their approach to care of deceased patients to ensure such incidents do not continue to happen in future.”
A spokeswoman for NHS Forth Valley said: “At no time were any cadavers lost or misplaced and the majority of issues reported over this six year period were due to administrative errors which were quickly identified and rectified.
“Strict policies are in place to ensure that all issues are reported so that they can be investigated and, where required, action taken to help prevent them from happening again.”