STILL GAME actor Greg Hemphill started a social media craze when he posted a snap of a license plate dedicated to the Scottish comedy show.

The funnyman shared the snap of the instantly recognisable ‘STLL GME’ reg plate on a blue Audi A4.

The £27,000 second hand car is being rented from a car dealers in Falkirk, but the owner of the plate remains a mystery.

You can buy a personalised registration for your number plates from DVLA online or at auction, prices vary from depending on the numbers and letters included.

Although fans of the comedian were left wondering if the plate in fact belonged to Hemphill himself.

According to dealership’s manager, Hemphill could have spotted the plate anywhere in Scotland.

Manager of H & J Burgoyne car hire, Barry Roberts said: “Everybody that saw it recognised it was Still Game straight away.

“I watch the show myself so I picked up on it straight away. 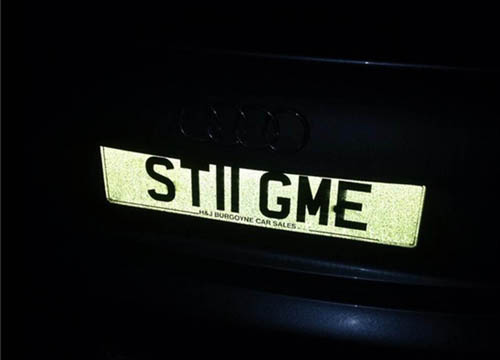 “The plate was on a car that came for a trade with a maintenance company we do business with.

“It came on an Audi A4, then was put onto a different Audi A4 we traded with them back in February.

“Someone must own the plate and since the car is being rented it could be anywhere in Scotland.”

Fans of the show took to social media to show their appreciation on Monday night.

Another fan Josh Irwin said: “This is smashin.”