THE PARENTS of a youngster pulled unconscious from a holiday swimming pool have published a heartbreaking picture of her on life support.

Cally Simpson was yesterday (fri) due to be brought out of an artificially-induced coma – which will establish whether she is brain dead, said her parents.

Cally, four, was on holiday with her father, Steven, in Salou, near Barcelona, when she was discovered unconscious at the bottom of the swimming pool at the Villa Marina Hotel.

The youngster from Arbroath, Angus, has remained in a coma since being rushed to Hospital Sant Joan de Deu in Barcelona on Tuesday.

Another holidaymaker pulled Cally from the pull and helped with emergency first aid.

It is believed Cally is still in the hospital’s intensive care unit, where doctors are planning to wake her up from an induced coma.

The latest post on a Facebook page, which is being run by Cally’s father, said that her family had been warned she may be brain dead.

A picture posted to the public Facebook group, which was originally set up to raise funds for her mother, Kate Miller, to get to Spain, shows Cally lying in her hospital bed attached to life support machines.

In the photo her mother is leaning over her, kissing her forehead.

It is believed Ms Miller, who had been caught up in the flight disruption following strikes in France, flew out to Barcelona on Thursday.

The latest post on the page said: “The doctors have just spoke to me and Kate and have told us to prepare yourself as our baby could be brain dead. They’re going to start taking her off one medication in the next 2 hours and if she seizures again it’s really bad and that means her brain won’t wake up.

“Please god help us. Wake our baby up please.” 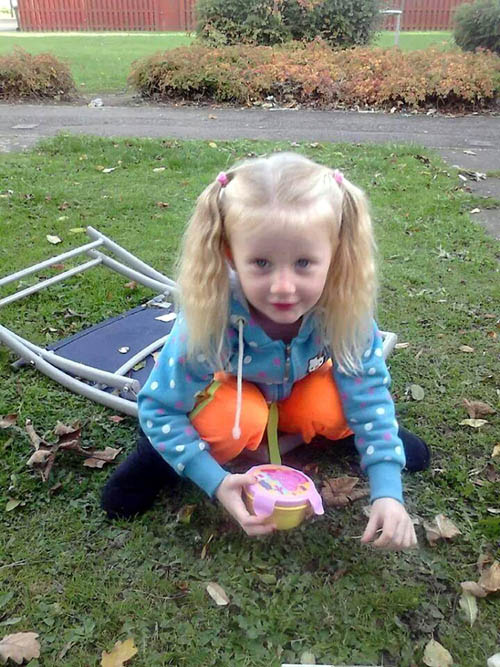 Friends responded to the heartbreaking image and post with their own messages to Cally.

Stacey Kelly said: “C’mon sweetheart. You can do this. Your just a young girl starting your life and I know and so does everyone else that you mean the world and more to your Mummy and Daddy. They need you princess. We all want to see your cheeky smile soon baby. Stay strong, you can do this.”

Sarah Roberts wrote: “Stay strong Mummy and Daddy. I am thinking of you so much and I am praying so hard for your beautidul girl to wake up so she can come home where she belongs.”