A RISING Scots actress has landed her first lead lead role in a Hollywood movie.

Fettes-educated Louise Linton is starring opposite House of Cards and Gossip Girl actor Sam Page in a romantic comedy due out later this year.

Serial Daters Anonymous, which is set in Milwaukee, Wisconsin, sees Linton take on the role of a ‘good girl gone bad’ as she seeks revenge on men after being jilted at the altar. 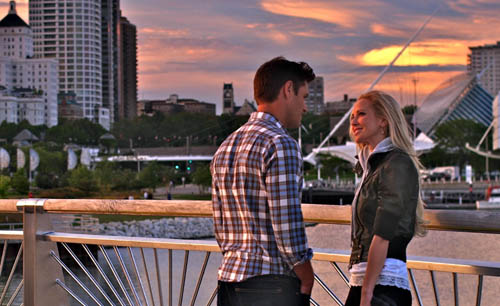 The Edinburgh-born 28-year-old revealed that her first attempts at a midwest accent resulted in unintentional hilarity.

She said: “My pronunciation, at times, caused a few giggles on the set.

“There were only one of two problematic words for me.”

Louise has brains as well as beauty, boasting degrees in journalism and law.

As well as working with Hollywood legends such as Warren Beatty and Robert Redford, Linton was spotted at the Vanity Fair party at the Cannes Film Festival alongside A-list actresses such as Jennifer Lawrence, Naomi Watts and Cate Blanchett.

In the movie, set to be released early next year,  she plays Claire, a soon-to-be married fashion columnist who the world of serial dating after finding out at the altar her fiance had been cheating on her.

Determined to give men their comeuppance she goes on a retaliatory dating streak.

However, the her plan becomes complicated when she reconnects with her first love – played by Page. 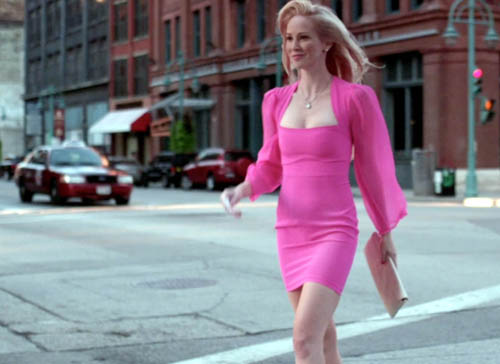 Linton said: “I loved playing this role because Claire has such a powerful character arc. She goes from being a sweet naive Midwestern girl to overnight turning into a bright fierce woman hell-bent on revenge against men.

“She goes through a wild transformation both in her personality and the way she dresses.That meant there were 30 plus wardrobe changes, so the costumes were great fun.

“I also loved working with Sam Page who played my love interest. He’s just finished a role on House of Cards with Kevin Spacey and was a very entertaining guy and easy to get along with.”

She added: “It was great fun to film and really went from the sublime to ridiculous. There was a very funny scene where I had to climb out of a car window in a wedding dress – a huge, fluffy Princess number with mounds of lace and taffeta.

“Trying to climb out of a car window gracefully in that outfit was impossible and gave everyone a giggle and hopefully it will make audiences laugh.

“But I wasn’t laughing in the next scene, when my character wakes up with a monster hangover, still wearing the very dirty and dishevelled wedding dress.

Linton has also just finished filming a part in the eagerly awaited biopic of Howard Hughes, which is being directed by Hollywood legend, Warren Beatty.

While being tipped to star in the remake of a major classic horror set to film later this year, Linton will also appear as the female lead in political action thriller Echo Effect set for release in August.

She also spoke at the the KILTR televised debate in New York on Scottish Independence.