A SCOTS “superman” who saved a disabled woman from a burning flat has become one of the new faces of Irn Bru.

Brian Provan, 43, will be appearing on bus stops across the country along with other winners, who have become the Scottish drinks latest “models” on the lead up to Glasgow 2014.

A delighted “Brian – Bru” – as he has dubbed himself – has shared pictures of himself smiling in front of his new ads. 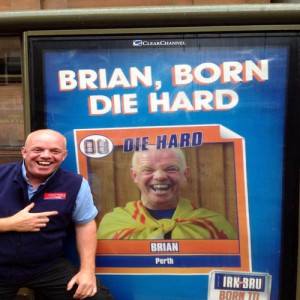 They show him grinning with a Royal Standard of Scotland tied around his neck.

Mr Provan, from Perth, said: “Don’t you just love it.

“One of the faces of the Commonwealth Games 2014.”

The delighted Parcelforce worker sent an email to friends containing the snaps.

Mr Provan also appears on the Irn-Bru website where he is this weeks “shiny” in their Born Supporters Sticker Book.

He is described as the group’s “Sofa Soldier,” and appears in the picture wearing an orange jumper with the phrase “Ready, Set, Recline” on the front.

In October last year drink manufacturer AG Barr, who make Irn Bru, were revealed as an official supporter of the Glasgow games.

Earlier this month, Irn Bru kicked of their Commonwealth Games ad campaign with their Born To Support catch line.

The television ad shows crowds of Scots gathering in Glasgow’s George Square to support the team, as well as a maternity ward and a lawn bowls club filled with pensioners, to show the country’s widespread support.

In April, Mr Provan saved Kirsty Adam, 33, who was trapped inside a first floor flat which was alight in Arbroath.

Ms Adam, who only has one leg, was unable to flee from the burning building, and was carried out by Mr Provan.

Following his heroic actions he was branded a “superman” by locals, and later had the super heroes famous logo tattooed on his chest.