A SCOTS actress and producer has revealed she is to star alongside DJ and musician Moby in her latest film.

Edinburgh-born Louise Linton, who has previously worked alongside Holywood legends Tom Cruise, Meryl Streep and Christopher Walken, will co-star with the DJ in new movie Intruder.

The film, billed as a cross between Alfred Hitchcock and Paranormal Activity and shot in Portland, America, sees Louise star as a young woman tormented in her house over a stormy weekend by an unknown intruder. 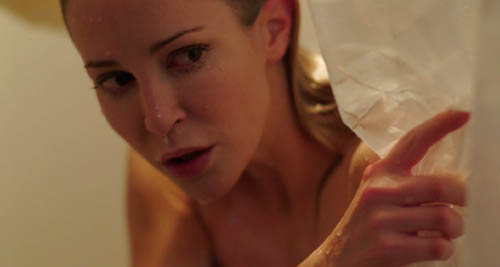 Moby – whose real name is Richard Melville Hall – is set to play a foreboding music teacher instructing the woman – a member of Portland Philharmonic Orchestra – in the cello.

A source close to the set said Moby requested his scenes be filmed in Los Angeles, where he lives – which resulted in the film’s crew frantically trying to sort travel arrangements for filming equipment to be taken from Portland to California.

But the demand did little to sour his relationship with his fellow co-star.

Louise described Moby as a “pleasure to work with” and the two have reportedly become close friends since filming.

Louise Linton is a former pupil of Fettes College in Edinburgh and has been marked as a rising talent in Holywood.

The actress is set to star in movie legend Warren Beatty’s much anticipated but as yet untitled $27m biopic of American business tycoon Howard Hughes, set for release next year.

And the 25-year-old has brains as well as beauty – with degrees in law and journalism already under her belt.

She is also the first Ambassador for major Scottish charity The Erskine Trust, which helps Scottish Veterans injured in Iraq and Afghanistan.

Moby shot to fame after his fifth studio album, Play, took the charts by storm in 1999.

The album has since achieved platinum status in more than 20 countries and the musician has gone on to sell over 20 million albums worldwide.

Intruder is written and directed by Travis Zariwny and is due out in the autumn.