A SCOTS firefighter who suffered a cardiac arrest at just 22 made it to the top of three of the UK’s highest mountains in 24 hours in a bid to raise awareness of undiagnosed heart conditions in young people.

Greg Wilson, 24, and his colleagues from Central Fire Station in Aberdeen made it to the top of Mount Snowdon, Scafell Pike and Ben Nevis, with a climbing time of just 11 hours and 50 minutes. 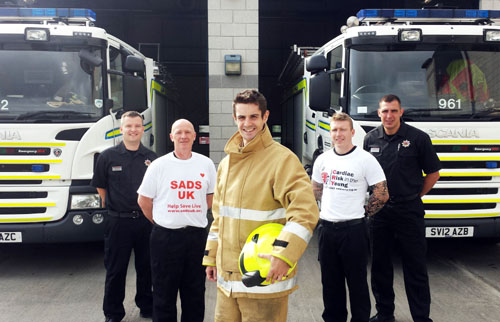 Mr Wilson, who lives in Aberdeen, suffered a cardiac arrest in 2012 and was saved by his quick thinking brothers who managed to keep his heart going until paramedics were able to get him to hospital, where he was diagnosed with an underlying heart condition.

Now in a bid to raise money for charities who work to raise awareness of heart problems in young people, Mr Wilson, his brothers Graham, 27 and Dominic, 18, and his colleagues have completed the gruelling Three Peak Challenge.

After some gentle persuading 11 of his co-workers signed up to support him in climbing the three highest peaks in England, Scotland and Wales.

Including driving between the mountains, it took the group 23 and a half hours to complete their task.

The group set off at 830am on Monday 21 July and despite “plenty of complaining” towards the end, their mammoth challenge was completed by 8am the following morning.

First on their list of peaks to challenge was Mount Snowdon in Gwynedd, Wales.

It took the group just three hours and 15 minutes to get to the top and back down the 3,560 ft mountain.

Next they made their way to the Lake District to take on the 3,209 ft Scafell Pike.

The group took just three hours and ten minutes to make it to the summit and back to the base.

Mr Wilson and his co-workers saved the hardest for last, driving back to Scotland to take on the 4,409 ft Ben Nevis.

Starting the daunting challenge to climb the country’s highest peak at 2.30am it took the group five hours and 25 minutes

The Ben Nevis climb took five hours and 25 minutes, meaning that the total climbing time for the group was 11 hours and 50 minutes.

Mr Wilson said: “It was tougher than we thought it would be, but we got it done.

“We started the climb at Mount Snowdon at about half eight in the morning and we finished on the Tuesday at eight, so including the driving between it took 23 and a half hours, but the climbing was 11 hours and 50 minutes.

“We didn’t starting to climb Ben Nevis at half two in the morning, but it was good, we had torches and stuff for a bit of a boost.

“It was a big team effort, we all stayed together on the climbs.

“Ben Nevis was the toughest. It’s the biggest of the three and we had been going so long, so it began to take it’s toll. There was plenty of complaining on the go.

He added: “It took a little bit of persuasion to start with, but my colleagues have been really supportive from the start, so it’s been great.

Mr Wilson suffered his cardiac arrest in 2012, while at home.

Luckily his two brothers, Graham and Dominic, heard him fall in his bedroom and rushed to his aid. 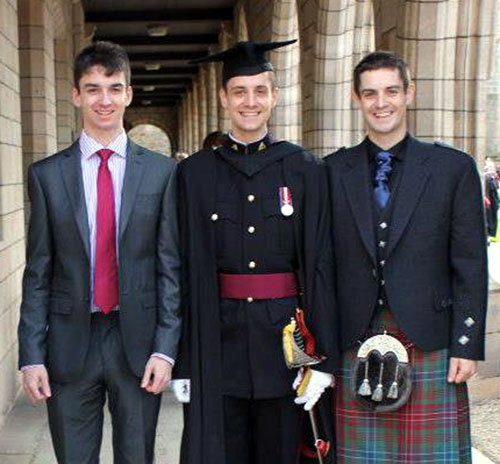 Dominic, a doctor, performed CPR on his brother until emergency services were able to get there.

After three weeks in hospital, Mr Wilson was diagnosed with the rare condition Wolff-Parkinson-White-Syndrome (WPW).

This caused an additional electrical connection in his heart which created a short circuit leading to his cardiac arrest.

After treatment, which involved doctors sparking the extra connection in his heart with a wire through his leg, Mr Wilson was given the all clear and has been able to return to his job as a firefighter.

He said: “I was in intensive care in Inverness and they put me in an induced coma for a day to let me recover, then I was transferred down to Aberdeen.

“They were able to diagnose me and it was a relatively simple procedure to fix it, so I was able to go back to work.

He added: “The only real reason I was able to come through was my brothers, and they won’t let me forget that.”