Edinburgh’s Panda Has a Bun in the Oven

EDINBURGH Zoo have confirmed Tian Tian the giant panda is pregnant and is due to give birth to a cub at the end of the month.

The news follows months of speculation after the panda underwent artificial insemination in April this year. 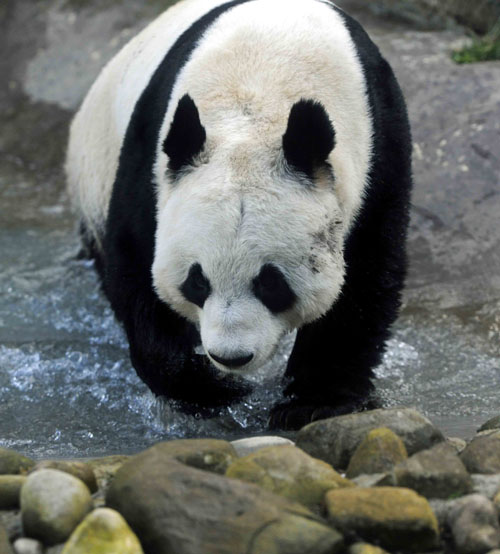 But after a long wait scientists at the zoo yesterday (Tues) revealed the complex process had been successful.

Tian Tian went through the same procedure last year in an attempt to induce pregnancy, the first time an artificial insemination had been performed on a giant panda in the UK.

But the attempt failed after the bear “reabsorbed” the foetus in late term – a common occurrence inpandas.

However, the zoo have finally confirmed the happy news that they are expected a baby panda cub, which could be here within just weeks.

Iain Valentine, Director of Giant Pandas for the Royal Zoological Society of Scotland, said: “The latest scientific data suggests Tian Tian the giant panda is now pregnant and that implantation has taken place, therefore she may give birth at the end of the month.

“This is all very new and complex science and we still have a bit of time to go yet, as like last year, the late loss of a cub remains entirely possible.

“Our team of internal and external experts have continued to analyse specific hormone and protein levels on a daily basis in Tian Tian’s urine.

“It is very likely that we will not know 100% if Tian Tian is pregnant until she gives birth; however very new scientific tests will give us a strong indication, they are just too new to be definitive.

“Two of our Chinese colleagues are due to travel to Scotland in mid-August and we continue to monitor and wait.”

Following tradition of panda zoos across the world a new cub would only be revealed to visitors on January 1 2015.

And following Chinese tradition, the cub would not be given a name until 100 days after its birth.

Giant pandas going through labour only start to show signs 24 hours before the birth – Tian Tian will seem restless, start to bleat and then her waters will break.

Pandas often give birth to twins, but only raise one of the cubs at a time.

But if Tian Tian gives birth to twins the rejected cub will be hand reared by keepers.

When the cub turns two it will go back to China, mimicking the natural age it would leave its mother in the wild.

Visitors to the zoo today spoke of their excitement at the news. 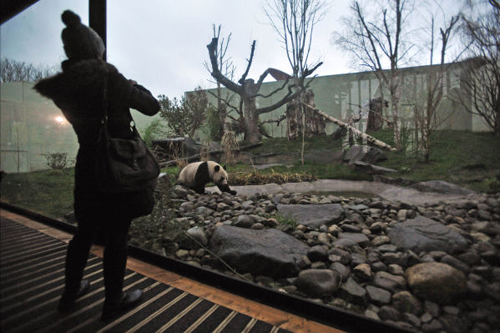 Sue Chapman, 50, and her husband Dave, 53, said they had come to the zoo especially to see thepandas.

Mrs Chapman, from Baldock in Hertfordshire, said: “It’s fantastic – and great for Scotland.

“We came to the zoo today especially to see them – we got tickets especially for the pandas.”

Lindsay Kerry, 39, from Nottingham, had travelled through to Edinburgh from a mountain biking holiday in Peebles in order to visit the zoo with her husband and their two children – Benjamin, 10 and Jacob, 8.

She said: “Its quite exciting – we’ve come through from Peebles today just for the zoo.”

She said: “This is the first time we’ve been to the zoo – and we came to see the pandas.

Elsewhere, Hilda Leung, 18, and her friend Jamie Cheung, 20, were visiting the zoo as part of a two-day stay in Edinburgh.

“If she had cubs, it’s definitely something we would come back and see.”

Iain Valentine, Director of the Giant Panda Programme at Edinburgh Zoo, said Tian Tian could be expected to give birth to her cub on 28 or 29 of August, following a gestation period of between 24 and 30 days.

And a dedicated team of 8 or 9 people will be on hand to help the panda deliver the cub – including twopanda experts due to arrive from China next week.

“The whole panda breeding project is always interesting and exciting and this is a key moment.

“We know she’s pregnant – we are using three tests and when you take them together we know what is going on.

“All the tests are pointing towards pregnancy.

“But there is no absolute test for pandas.”

“She’s a female panda who wants to breed.

“She’s done it before and wants to do it again.

“The cub will be massively popular. In 2012 when the pandas came the visitor numbers jumped.

“In the last two years, one and a half million people have come to see the pandas.”

Asked what made this time different from last year’s failed pregnancy, he said: “There’s a difference between this year and last year.

“The tests are giving a different set of results and her behaviour is more promising.

“It could still go wrong, but where we are at just now is different from where we were at this time last year.”