A CYCLIST has posted a helmet cam video of the terrifying moment he hit tram tracks in Edinburgh and was thrown onto the other line.

The wheels on Euan Mackenzie’s bike fall into the groove of one of the tramlines and he is flung across the road.

Mercifully, no tram was coming in the opposite direction but Euan claimed it was only a matter of time before the tracks killed a cyclist. 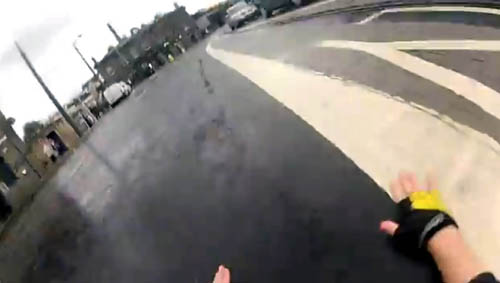 A number of cyclists have had accidents after trying to cross the tracks of the £776m tram system, which is laid along busy roads through the city centre.

Euan, who posts videos on YouTube as “Raging Bike”, was recording using a Go-Pro camera when the accident happened.

The video shows him cycling in the busy west end. Without warning, the camera sickeningly lurches to the right and Euan yells in pain and horror as he skids into the opposite tram lane.

As the camera rolls, he is surrounded by passers-by who come to his aid.

He said: “Someone will get killed at this junction, the design is terrible and there is no consideration of cyclists.

“I was cycling at the optimal angle to cross those tracks, but as you can see they are lethal.

“I spent my formative years in Brussels and crossing tram tracks were a daily routine.

“I never fell because they were designed correctly.

“I’d like to thank the brilliant people who came to my aid. Wonderful.”

According to cyclists, the design of the system means their wheels become trapped in the groove which allows the metal tram track to sit in the road.

Edinburgh councillor Gavin Corbett, who regularly cycles in the city, called for urgent action to be taken to fix the tramlines.He said: “Constituents of mine have also expressed alarm about how difficult it is to cross.

“The council urgently needs to get on with improving road markings here to steer bikes away from the tracks.

“It also needs to look at creating more space for cyclists and looking at new technologies which make tram tracks more bike-friendly.”

Dasha Polakova, assistant manager of a nearby bike shop, said: “We’ve had a few people come in since the trams started who have crashed because of the lines.

“The tracks outside Haymarket are the big problem, it doesn’t matter which way you are travelling. If you aren’t experienced it is easy to crash.

“When it is wet, which is a lot of the time here, the tracks get very slippy. I imagine it is only going to get worse with winter, especially for those with road bikes.”