STILL GAME star Ford Kiernan surprised fans yesterday by challenging them to pick him out of an old school photograph. 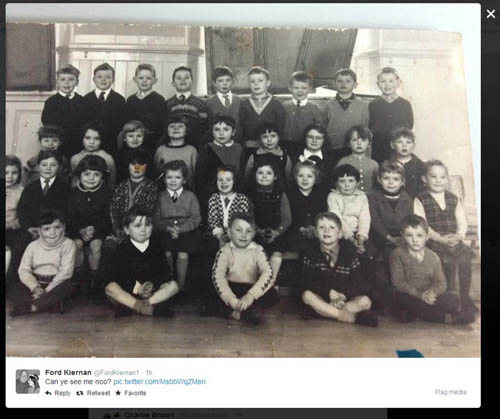 The 52-year-old comedian posted the vintage snap with the caption “Can you see me noo?” to his 22,700 followers.

The black and white image shows 34 happy pupils posing for a class photograph at Alexandra Parade Primary School in Glasgow.

Fans of the comedian took to twitter to make their guess at which pupil was Kiernan.

Craig Murphy guessed: “Back row. 4 in from the left?”

Another fan Charlie Brown suggested: “3rd in from the right, on the back row?”

The 21-night run of the Still Game stage show, at the SSE Hydro in Glasgow has sold over 200,000 tickets.

The original four dates for the staged theatrical version of the comedy, September 30 to October 3, sold out in hours, crashing internet booking sites.

The run has since been extended several times, with the most recent addition of five shows from September 19-21 to satisfy demand.

Last week, it’s starts, Ford Kiernan and Greg ­Hemphill revealed they are in advanced talks with the BBC about broadcasting a new series of the popular comedy and creating new adventures for its characters Jack and Victor.