A 92-year-old woman is amongst 26 people across Scotland who have lost a total of £1.3m due to “’vishing” scams in the last few months.

Yesterday (tues) Police Scotland revealed that there has been a “drastic increase” in the number of people – most of them OAPs – being caught out.

Vishing is when a criminal calls their victim claiming to be from their bank’s fraud department and says that their account has been “compromised”.

Victims are urged to transfer their money from the compromised account to a “safe” one, which actually belongs to the scammers and is immediately emptied. 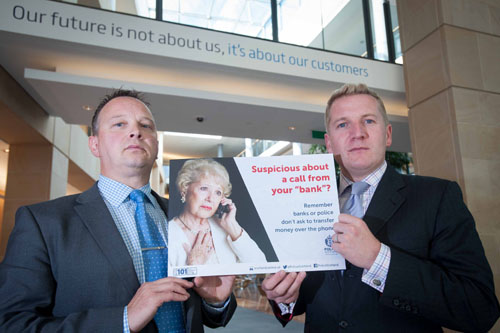 According to Police Scotland Detective Inspector Arron Clinkscales it is “predominantly the elderly and infirm” who are being targeted.

Throughout Scotland there have been 26 incidents reported with £1.3m being stolen by fraudsters.

Speaking Yesterday DI Clinkscales said that it was mainly people in their “60s, 70s, 80s and 90s” being targeted, with the oldest victim being 92.

The woman lost her life savings worth £99,000 in the “very convincing fraud”.

At an event held at the Royal Bank of Scotland’s headquarters in Edinburgh yesterday it was revealed that institutions including the Bank of Scotland, Barclays and Santander had all taken hits.

DI Clinkscales also revealed that on some occasions victims had actually been taken into the banks by criminals to withdraw the money.

Chris Wilson, Managing Director of RBS in Scotland said that all their frontline staff were trained to spot such attempts.

As part of the scam, victims are put off their guard by being encouraged to hang up and call the number on the back of their bank card.

But the fraudsters simply stay on the line and pick up their victims “call”, usually with another criminal answering to avoid raising suspicion.

DI Clinkscales said: “Those responsible for committing these offences are despicable individuals who mostly prey on the elderly and vulnerable members of our communities.

“It is essential that police and the banking industry work together to address this matter and ensure that the public are fully informed on the type of tactics criminals will utilise to obtain their personal details or money.

“Our awareness-raising posters be available within bank branches throughout Edinburgh and local policing teams will deliver crime prevention leaflets to various addresses across the city.

“In addition, bank staff are being given additional training to identify potential victims before they remove large sums of money from their accounts.

“I would like to take this opportunity to remind the public that neither the police, nor banks, will cold-call an account holder and ask for personal details, or for money to be transferred elsewhere.

“If you receive a call like this, do not comply. Hang up and ensure the line has been cleared before contacting police.”

Chris Wilson, Royal Bank of Scotland Managing Director RBS in Scotland said: “Fraudsters work by creating fear that a customers savings may be under threat. No bank will ever ask a customer to transfer their savings or part of their savings to another account or another bank in order to “protect the funds”.

We’re delighted to join Police Scotland in this campaign to raise customer awareness around how these scams work.”