DRONES and lasers are set to be deployed by the Scottish Government in a £41m bid to rid an island of its rampaging population of geese.

Islay has 70% of the world’s barnacle and white-fronted geese – but the birds are acting like “a swarm of locusts” according to angry farmers. 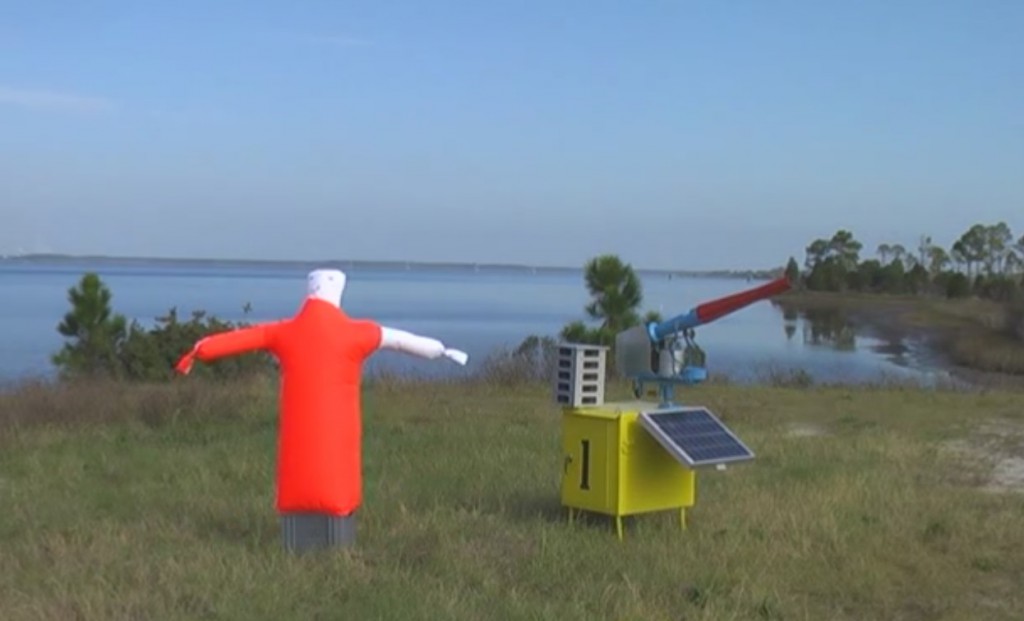 The birds barely paid any notice and SNH is planning a tougher strategy, under pressure from Islay farmers concerned about the damage geese are causing to their £11m-a-year industry.

Radio-controlled drone aircraft, powerful laser beams and robotic four wheel drive vehicles are among the techniques being considered to drive away the geese.

If that fails, a large-scale cull could be ordered, either by shooting or covering geese eggs in oil and smothering the chicks inside.

The controversial crackdown – which is opposed by groups including the RSPB – is set to cost taxpayers between £30m – £41m over the next 15 years.

The ‘Islay Sustainable Goose Management Strategy devised by SNH’s and the National Farmer’s Union (NFU) aims to cut the population by 30%.

According to a draft report on the scheme, self-launching kites, squawkers that replicate bird noises, spinning, light-reflective ‘peace pyramids’ and ‘flash harry’ – a powered rotating device, have all proved “ineffective”.

Helium balloons were “not robust enough to withstand the severity of Islay’s winter weather”.

Goose-scaring techniques labelled as “possibly” to be used on Islay include lasers, with laser pen trials due to be carried out in 2014-15, “long-term work at the development of automatic robotic vehicles to scare geese and radio-controlled drones that require a “skilled operator”.

Techniques ruled out by government researchers include ‘raptor models,’ falconry’ and ‘chemical deterrents’ – due to its “expense.”

Andrew Bauer, deputy director of policy at the NFU Scotland said: “The ground at Islay is very fertile, there is plenty of food, and their numbers have grown, there are around 50,000 geese currently.

“On a field of grass, the geese are like a swarm of locusts, eating everything and farmers are left with mud. They eat crops and foul on the grass, making it unsafe and unhealthy for livestock, with concern for salmonella.”

Mr Bauer said that if birds have to be culled “one technique that may be used is oiling eggs, meaning embryos and baby geese will be suffocated to death.

“It is a hugely contentious and very sensitive issue.”

But Eben Wilson, director of Taxpayerscotland, questioned the cost of the programme.

He said: “Can this very expensive program really be justified as being value for money? Clearly a lot of centralised planning is going into thinking about how to resolve this problem, but we have to ask if taxpayers would be better served by locally sourced effort at much lower cost?

“The approach smacks of an expensive centralised bureaucratic approach to a local issue, which inevitably leads to gold-plated ideas about scaring methods, strategic processes and reporting audits.”

Libby Anderson, Policy Director or animal charity OneKind, said: “It would be hugely disappointing to see the emphasis on Islay change from a combination of deterrence, diversionary feeding and compensation for farmers to potential killing on a large scale.”

A spokesman from RSPB added: “Though we acknowledge that geese can affect farm profits, we have expressed our opposition to this plan, and questioned its compliance with international law.”

A Scottish Natural Heritage spokesman said: “We are currently finalising a new longer term goose management strategy for Islay. This will reduce the crop damage caused by barnacle geese, improve habitat for white-fronted geese and make best use of available funding.

“The aim is for a pragmatic approach that balances the need to support sustainable goose populations with the interests of Islay farmers and the limitations on available budgets.”