PENSIONERS breezed past police to “occupy” the offices of the Secretary of State for Scotland yesterday – only to discover he was on holiday.
Veteran anti-nuclear campaigners targeted Alistair Carmichael’s workplace amid the stately surroundings of Edinburgh’s west end.
The protesters, who normally attempt to blockade the gates of Faslane in the west of Scotland, wanted to confront the Lib-Dem cabinet minister over the UK’s nuclear arsenal. 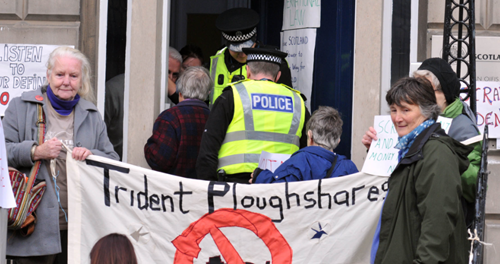 Police appeared to have been tipped off about the occupation bid in Melville Street and two officers were on guard against the 13 protesters, most of whom are in their 60s or older.
That did not prevent Barbara Maver and Mary Millington, both 66, from simply following an office worker into the Scotland Office and then sitting in the corridor.
Pictures from the scene show a police officer belatedly ducking under a protest banner in a futile bid to stop the ladies getting in. 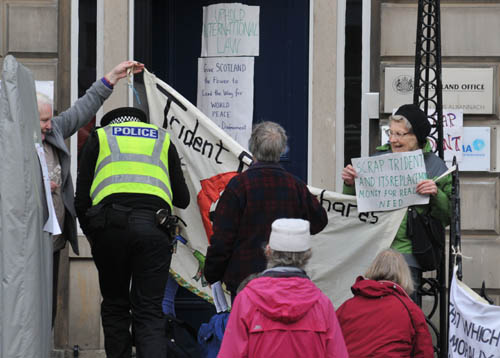 Barbara, from Edinburgh, and Mary, from Glasgow, decided to leave after about 30 minutes after being assured by an official that the Secretary of State was on annual leave.
The protest began at 10am with twelve elderly protesters plastering the building with hand-painted signs that read “Scrap Trident” and “Uphold international law”. 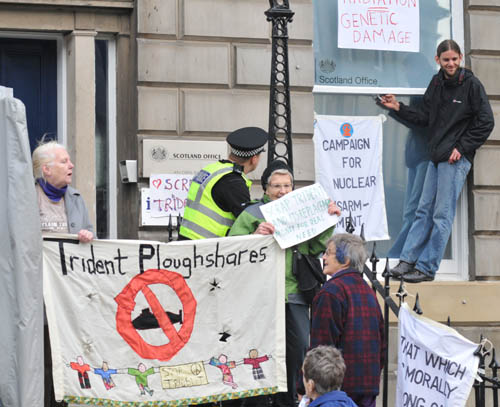 Mary said: “As someone went in I just slipped in. We were asked to  leave and we said we wouldn’t until we spoke to someone.
“Secretary of State Alistair Carmichael was on holiday.”
Barbara said: “I really feel like we got what we went for, which was to put  across the voice of the anti- nuclear position.
“The staff were surprised. The security guard was trying to push me out.”
No arrests were made and the protesters left the street at about 11am.

Council accused of waiting for model tenant, 94, to die rather than fix her “disgusting” home