Van man snapped on mobile next to safety sign

A VAN driver has been snapped on his mobile next to a sign boasting that his firm is “committed to keeping Scotland safe”.
The photograph was taken on Monday at the Gogar roundabout, one of Edinburgh’s biggest and busiest junctions.
The driver with security firm CSS can clearly be seen with his left hand poised on top of the steering wheel while holding a mobile to his ear with his right hand. 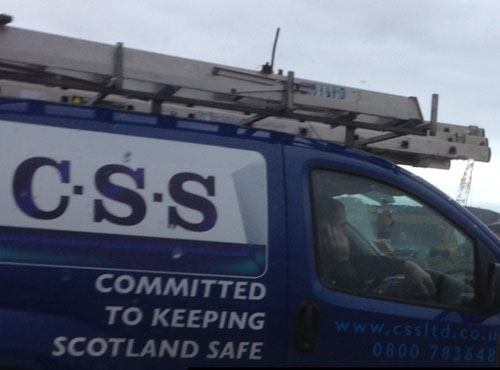 The large sign on the van states: “CSS – Committed to keeping Scotland safe.”
The picture was posted by website Edinburgh’s Worst Drivers, which campaigns to make the city’s roads safer.
The passenger that took the snap from a passing vehicle said: “The traffic was stop-start and rolling at walking pace.
“I wondered why he kept leaving a big gap in the queue, and now I know it was because he wasn’t paying attention.”
James McLoughlin, spokesperson for road safety charity Brake said: ““Using a mobile phone at the wheel is a serious offencethat dramatically increases your risk of crashing and killing or seriously injuring someone.
“The impact of using a phone on reaction times, hand-held and hands-free, is on a par with drink driving.
“We’re appealing to drivers to put their mobile phone on silent and out of reach, because no call or text is worth a life.
“We also call for traffic policing to be made a national priority, so police have the resources to catch and penalise risky multi-tasking drivers, as well as much higher fines to deter phone use by drivers.”
In Scotland , you may be given the chance to pay a £100 fine and take three penalty points on your license without going to court if you are caught on the phone whilst driving.
A spokesman for Connelly Security Systems said: “We cannot comment on the incident because we may take disciplinary action.”
Details of the incident have been forwarded to Police Scotland.