Video captures woman trying to fight her way into cab

AMAZING video footage has emerged of a woman trying to fight her way into a taxi in the middle of a busy street.

The clip which was filmed in Dundee and appeared on YouTube and Facebook, shows a woman in black arguing and shouting at a man in the taxi’s driver seat.

The woman then leans into the car and begins to man-handle the driver – hitting the car’s horn repeatedly – numerous cars slow to pass the battling pair. 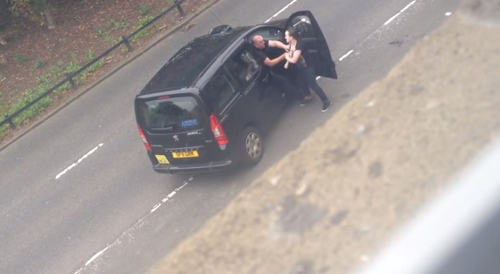 As they struggle, the woman climbs in to the car and is pushed out and then fended off by the driver.

They continue to struggle before the woman walks away, leaving the driver and his car still stopped in the middle of the road.

The incident occurred on South Road and was filmed from a household for over a minute. 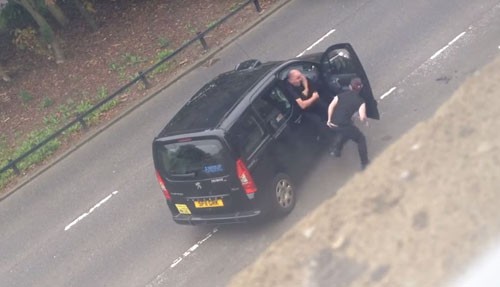 Dundee police say they are investigating but weeks after the incident took place still no one has been charged. A Dundee police spokeswoman said: “We are still making inquiries.”

“Anyone who has information that could assist with inquiries is asked to contact Police Scotland on 101,” she added.

The video description reads: “This is after about 10 minutes of arguing, she stopped the car and opened the driver’s door, leaving the car half on a busy road.”

Dougie Inglis, owner of Discovery Taxis said: “The driver in the video works for us. Apparently this happened around ten weeks ago.

“The police have all the details. It should have already been dealt with. There are two dedicated police officers dealing with it. But no one’s come near us at all to ask about it.” 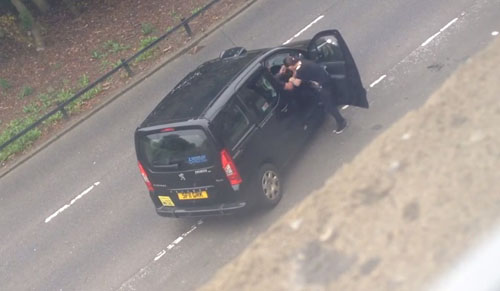 Graeme Stephen, chairman of the Dundee Taxi Association, said: “I don’t know what happened in this case, but in general safety is a concern for taxi drivers.

“You’re picking up lots of people — sometimes groups of them — and you’re on your own.

“You don’t know if they’ve taken alcohol or drugs, or whether they’ve just argued with their partner.

“A whole host of things could have upset them and the taxi driver gets the brunt of it.

“I find that it’s helpful to have CCTV in the taxi.

“Lots of taxis in Dundee have it, I’ve had it for six and a half years and it’s very good.

“The system is set up by the council and the police and they are the only ones who can play back the footage.”