A THEATRE show had to abandoned after the star Brian Conley fell ill – and then his understudy fell off a tightrope.

The Halloween night performance of Barnum at the Edinburgh Playhouse had already been hit by I’m A Celebrity contestant Conley taking ill.

Stand-in John Stacey then fell off a tightrope about 6ft above the stage, breaking a bone in his foot. 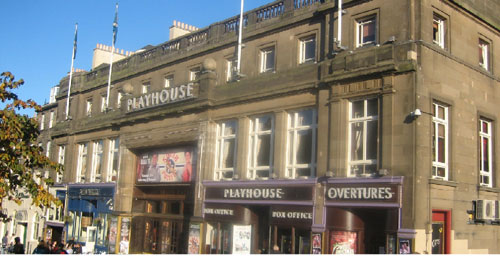 The unfortunate performer had to be taken to hospital by ambulance.

The accident happened shortly before the interval. Theatre goers – who had paid up to £62 for their seats – were informed there would be no second half.

Disappointed fans took to the Barnum official facebook page to vent their frustration.

One audience member, Jackie Thomson said: “Can’t believe that nobody told us before the performance that Brian Conley was unwell, then to top it of his understudy hurt his ankle so no second half. Feel sorry for him but so disappointed.”

Sandra Pinkman said: “Disappointed with the show and that we ended up only seeing the first half due to BCs understudy becoming injured.

“I got the tickets as a birthday gift and only asked for them because Brian Conley was the lead. Saw him as Fagin in Oliver! and he was fantastic in that.

“Have been in touch with the manager of the Playhouse, so will see what they offer in terms of a refund.”

Another audience member, Amber Rennie, commented: “ So disappointed with the show, waste of £50! Glad to be receiving a refund as only saw 1st half!”

“Brian Conley, who had been unwell, was able to return to the role on Saturday”

The musical, which co-stars West End star Linzi Hateley was originally written by Mark Bramble and premiered on Broadway in 1980.

It tells the life story of 19th century American showman Phineas Taylor Barnum as he travels the world before teaming up with JA Bailey to create Barnum and Bailey’s Circus.

The current UK tour was produced by Michael Harrison and was in its second last night of a six date run in the 3,000 capacity Playhouse when the show was suddenly stopped.

ATG, the theatre group who run the Playhouse, refunded the price of the tickets.

Brian Conley returned the following night for the last performance at the Playhouse.