A Gulf War veteran has become the first ex soldier in Scotland to receive horse therapy to deal with his mental trauma.

Vince Davidson, who was revealed earlier this year to have lived in his shed in the Scottish borders for 15 years, has been given an advanced trial of the groundbreaking treatment.

The 49-year-old from Coldstream fought with the King’s Own Scottish Borderers (KOSB) to eject Saddam Hussein’s forces from Kuwait. 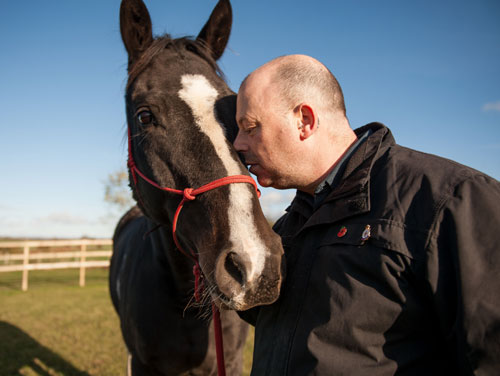 The father of two has battled with post traumatic stress disorder (PTSD) and Gulf War syndrome which left him unable to live a ‘normal’ family life for decades.

After just 10 minutes standing in the field with a horse Vince said he felt relaxed for the “first time in years” and able to “feel again”.

He can now spend time with his eight week old grandchild and no longer needs pills for high blood pressure.

The treatment was first developed in America to help people with drug addictions and was also found to help for children with autism.

The charity ‘Dare to Live’, for squaddies struggling with civilian life, will be officially launched in Scotland next year and already has a base in East Sussex.

Because horses are hypersensitive the therapy teaches servicemen to regulate their own emotions.

Before being able to control a horse they first need to first conquer their own feelings of anger, anxiety and fear.

This self control can them be transferred and called on in everyday life, giving former servicemen the freedom to move on.

Vince explained: “Before when I became anxious I would just explode, I could be quite violent, that’s why I locked myself in the shed.

“It’s all consuming. You can’t think properly. The only feelings I have had for 20 years was anxiety and depression. It’s like walking through treacle, there is no way of getting out.

“The horses took a lot of that away straight away, to be with the horses you have to be on the same level.” 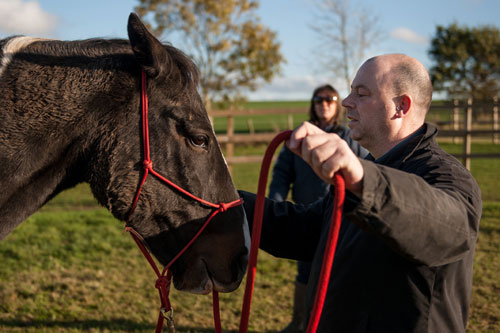 He took part in the first session in July this years and now goes back to the farm in Berwickshire twice a week.

The amazing transformation in Vince had given him back his family life and he is now able to spend time with his grandchild Jacob.

“There was no way I could have stood the sound of a baby crying before,” he said. “It was just impossible. But I’ve got a tolerance now.

“This is the first thing that has made a significant difference instantly,” he said.

“My blood pressure was so high I was going to have to go on statins for life. Within being here one time my blood pressure had gone back to a level where I didn’t need to take pills.” 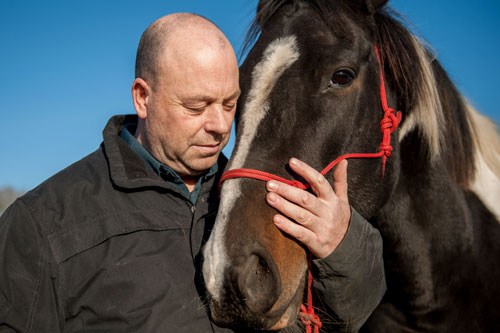 It was in January when Vince left the safety of his shed after being introduced to Facebook by his daughter and discovering he is not alone in suffering the after effects of war.

He founded of group Veterans Helping Veterans and is now helping others come to terms with life after the forces.

“I’m in a better place. There are other veterans who would benefit from this. I will be sending them here as soon as possible.”

The programme has already helped 40 ex-service men and their families in England from a base in East Sussex.

Dare to Live Operations Manager Hugh Forsyth has experienced first hand what the horse therapy can do and says it was “life changing”.

The 44-year-old’s service with the 33 Engineer Regiment Explosive Ordnance Disposal spanned 12 years and included clearing mines in Bosnia and tours in Northern Ireland.

“I suffered from undiagnosed PTSD when I was 18 on my first tour of Northern Ireland. 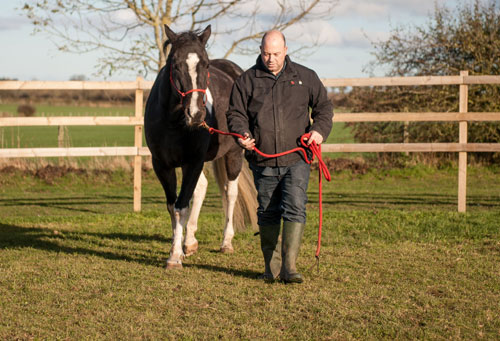 It wasn’t until he left the forces he was diagnosed and underwent conventional treatments and therapy which helped “stabilise him” but he was still living a very sheltered life.

“Every dust bin, every person or backpack was an IED waiting to go off,” he said. “It really narrowed my life.”

It got to the point where Hugh tried to take his own life – but now he has managed to turn it all around with the help of horses.

“Self regulation is a hugely valuable tool,” he said. “Maybe if I had got the help sooner I wouldn’t have tried to take my own life.

“It was life changing, so much so I decided I want to do this as a living.”

He added: “All my mates who have left the military, everyone has suffered in some sort of way. This can be really valuable.”