THE FACES OF STILL GAME stars have been immortalised in shortbread thanks to an enthusiastic fan and baker.

Dave McPake from Stirling, posted a photo of Jack and Victor shortbread faces on his twitter account yesterday morning.

The photo shows the faces of Jack Jarvis, played by Ford Kiernan and Victor McDade, played by Greg Hemphill, on shortbread models positioned in front of trays of shortbread in Campbell’s bakery in Crieff where the 30-year old works. 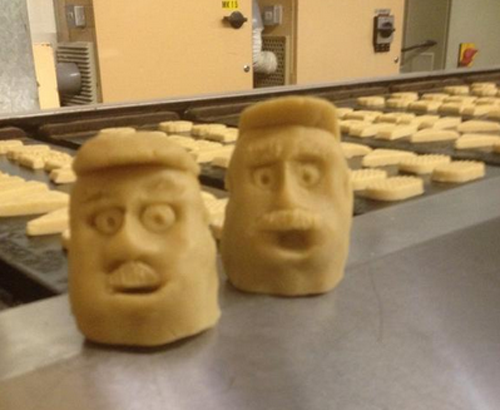 The uncanny likeness was picked up on by twitter users who commented and re-tweeted the photo.

One user said: “These are fantastic!”

Another of the comments read: “Nice one. I thought at first it was biscuits, but on reflection Jim Murphy takes that.”

Dave only has one follower on twitter yet his tweet was favourited 88 times and re-tweeted 34 times including a retweet by Greg Hemphill himself.

The comedy tv series featuring two Glaswegian OAPs, Jack and Victor, first aired in 2002 on the BBC and ran for six seasons.

The two creators Ford kiernan and Greg Hemphill are currently planing a new series for tv.

Campbell’s Bakery have been making shortbread since 1830 in Crieff, the capital Strathearn, Perthshire. They are one of Scotland’s oldest independent family run craft bakeries.