Otter in ecstasy after turning lobster creels into giant loofah

A VIDEO shows an otter in heaven after turning lobster pots into the world’s biggest loofah.

The three-minute film shows one of the normally elusive creatures in ecstasy as it uses the rough surface of the creels for an all-over scratching session.

The footage was captured at Elgol, Skye, by tourist Max Cope.

It shows the otter rolling over to scratch its back, stretching full length to give its tummy a scratch and rubbing its head against the pots.

Max, from Newark, Nottinghamshire, had never seen an otter in the flesh before.

The 49-year-old, who was visiting Skye with his wife Becky, said: “It was a wet, miserable Monday and we pulled up at the harbour at Elgol. 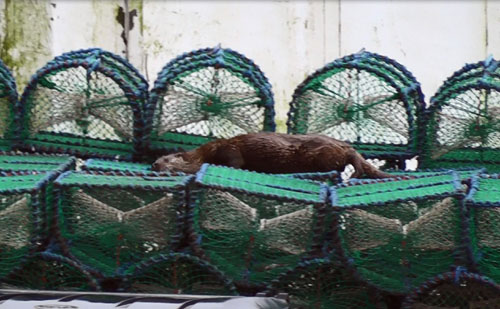 “I looked down on the rocks by the slipway and suddenly spotted the otter.

“It saw me but wasn’t bothered at all. It just ran up to the lobster pots and had a good scratch.

“At times the otter was literally five yards from us. It was completely unexpected, I’m glad I managed to catch it on my video camera. 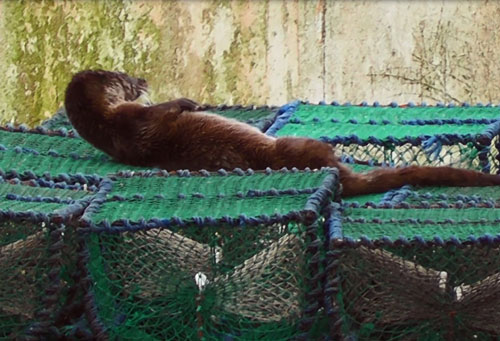 He added that even after filming the otter stayed near them for another few minutes.

“We thought it had disappeared but I spotted it again, munching on a fish.

“It was a hell of an experience. I know that normally we would be lucky to get a fleeting glimpse of such a creature so to be in its company for several minutes was wonderful.”