Rail Union RMT- National Union of Rail, Maritime and Transport Workers- is stepping up its pressure on Transport Scotland and Network rail to bring forward the date for ending the dumping of raw sewage on Scotland’s railway tracks.

Scotrail currently dispose of the sewage from their train toilets onto the tracks and have pledged to end the practice by December 2017 when they plan to fit retention tanks.

RMT have called on Transport Scotland and Network Rail to put pressure on Scotrail’s new operators Abellio-due to take over in April 2015- to bring forward the date to April 2016. 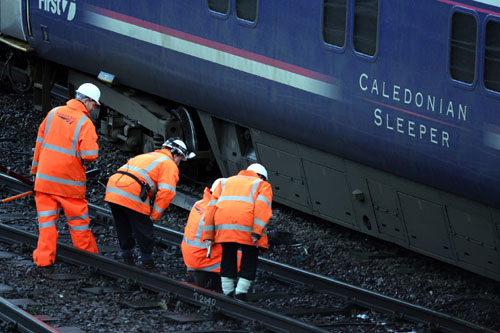 However Transport Scotland confirmed that they will stick to the December 2017 target date.

RMT General Secretary Mick Cash said: “It is clear in the response from Transport Scotland that they are being forced to address our demands but we want more detail on what they intend to do and the union still believes that swifter action is perfectly achievable.

“We want to know exactly what TS means by identifying “co-ordinates” and putting safety measures in place to protect staff. If that means identifying the sewage hotspots then that has been a core RMT demand of this issue, not just in Scotland but across the whole of Britain, and we should be getting on with it now.

“RMT has already made significant progress in bringing forward the date when the scandal of dumping raw sewage on Scotland’s railway tracks is brought to an end.

“This union intends to keep the pressure on Transport Scotland and their franchise holders for the earliest possible end to this scandal on Scotland’s railways.

“That is why we are stepping up our campaign RMT has said all along that if it was wealthy bankers getting sprayed with sewage rather than rail workers then this scandal would be ended overnight. RMT’s campaign goes on.”

The next phase of their campaign will involve RMT members across Scotland handing out thousands of leaflets demanding the earliest possible end to what they call a “disgusting and dangerous practice.”

The rail union say an industrial response has not been ruled out if there is any delay.