JAMIE MURRAY has complained about the lack of indoor tennis courts in Scotland.

The 28-year professional tennis player criticised tennis authorities earlier this month for failing to boost the sport on the back of his younger brother’s achievements.

He has now taken to Twitter to complain about the lack of indoor facilities for aspiring tennis players. 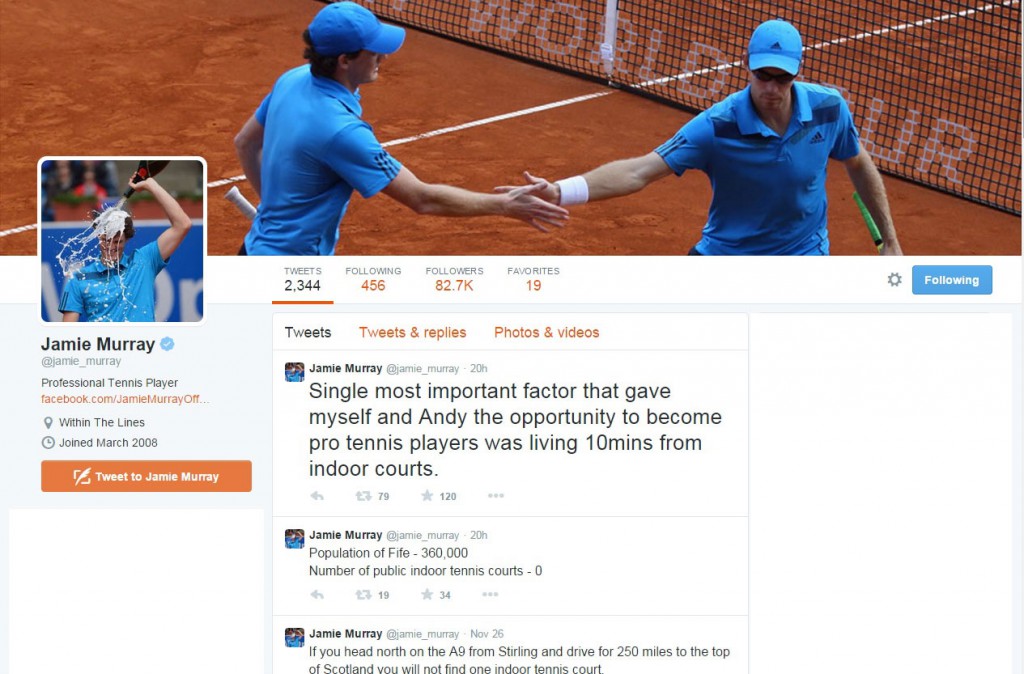 He tweeted: “If you head north on the A9 from Stirling and drive for 250 miles to the top of Scotland you will not find one indoor tennis court.” 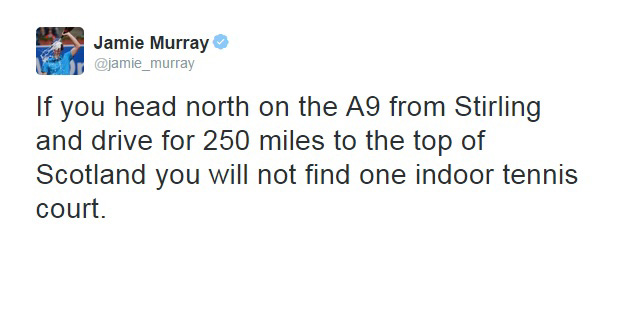 This was followed by another tweet which targeted Fife, Scotland’s third largest local authority.

Explaining his annoyance, he added: “Single most important factor that gave myself and Andy the opportunity to become pro tennis players was living 10mins from indoor courts.” 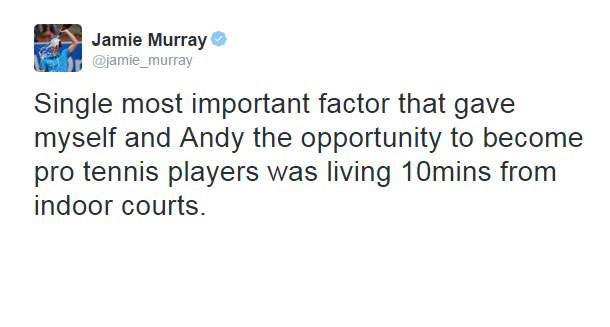 A Tennis Scotland spokesperson said yesterday. “Since January 2013 more than £3.5 million has been invested in tennis projects that have been either completed or are committed to, representing over 30 initiatives and more than 70 new courts, in addition to those that have been refurbished, many with floodlights.

“This has afforded thousands of people the opportunity to play tennis at a local level for the first time.

“While we would, of course, like to see more indoor tennis projects completed in Scotland, we also have to recognise that securing multi-million pound partner funding during the recent recession has been a challenge that is not restricted to tennis.

“Tennis Scotland is in discussion with partners in St Andrews, East Kilbride, Inverness, Edinburgh, Galashiels and Dumfries to look at the feasibility of potential new indoor facilities and other indoor projects such as Gleneagles are already confirmed.”

Cllr Mark Hood, Executive Committee member for Fife Council said: “There are some strong tennis clubs in Fife that the council supports.

“We also offer people a pathway into these clubs by running activities like short tennis in our community use schools and leisure centres. Some games halls also have tennis markings to allow full indoor tennis.”

Jamie specialises in doubles and is currently ranked 42 in the world doubles by the Association of Tennis Professionals (ATP).

In 2007 he won his first and only Grand Slam doubles title in the mixed doubles at Wimbledon where he was partnered with Serbian Jelena Jankovi?.

However costs proved prohibitive and so a partnership seemed likely.

In August this year Stirling council received almost 200 objections to a proposed development for a housing development and leisure centre from a team including Judy Murray and golfer Colin Montgomerie.