THE world’s only beach airport with scheduled flights has a big problem at the baggage reclaim hall – the wind keeps blowing it apart.

Tiny Barra Airport in the Western Isles is famed for the breathtaking beauty of the approach to its sandy runway.

But the winds of up to 120mph that batter the island destroyed the 12ft by 6ft baggage reclaim during the summer (below).

The airport spent £2,500 on a shiny replacement only to have the roof ripped off shortly afterwards by the same vicious winds. 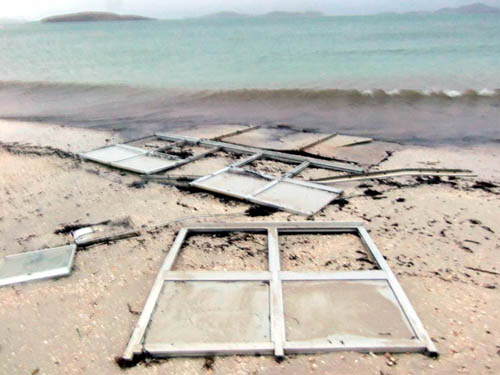 Ironically, airport chiefs can boast with justifiable pride that they have never lost a piece of baggage through human error in 78 years.

The runway on An Traigh Mhor beach has been used for flights since 1936. Last year, more than 9,500 passengers flew in.

Part of the attraction is the miniscule baggage reclaim which is roughly the size of a bus shelter and has room for about half a dozen cases on its 6ft of conveyer belt.

The airport’s firefighting team double as baggage handlers, passing the cases through an open window on one side of the shelter. 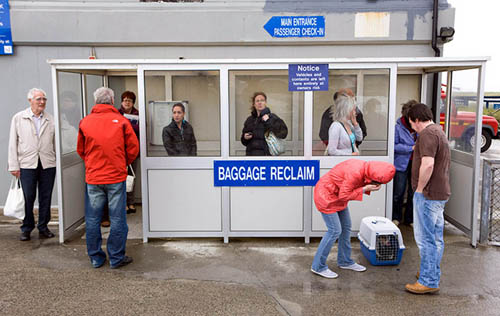 The system worked well until June this year when a gust of wind literally blew the original hall apart (above) and spread the wreckage across the beach.

Airport manager Michael Galbraith said: “Thankfully when the old structure blew away it didn’t hit any cars in the car park.

“It blew off down the beach and we had to go and collect the pieces.”

While they waited for a replacement, passengers’ bags were simply placed on the ground near to the terminal.

A smart new baggage reclaim was installed later in the summer. 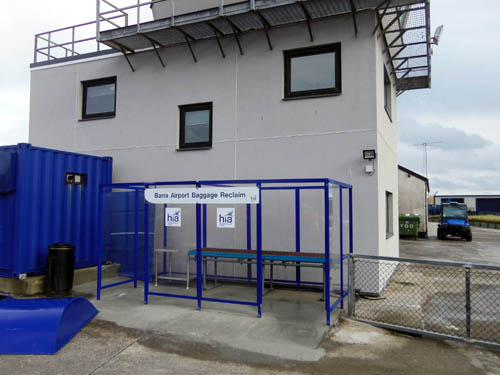 Mr Galbraith said: “Shortly after the roof of that blew off too, over on to the other side of the road (above).

“I got in touch with the manufacturers to ask about warranty.

“But they said due to the conditions in this area the warranty didn’t apply.”

He added: “We could have had a replacement roof sent over but it was just easier to patch it back up ourselves.” 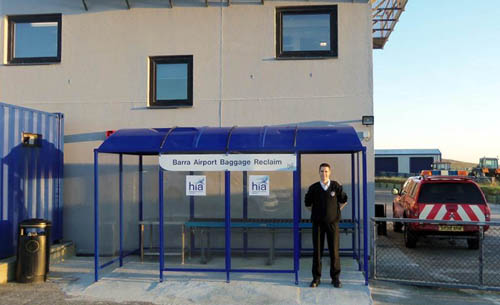 Mr Galbraith (above) admitted: “There has since been some shaking but so far – touch wood – it’s all held together.”

Passengers pay around £80 for a single between Glasgow and Barra, flying aboard Twin Otter aircraft which seat up to 18.

Other airport facilities include a pay phone and cafe. During good weather, there is one daily flight from Glasgow – apart from Sunday for reasons of religious observance.

Barra Airport is the only airport in the world to have scheduled flights landing on a beach, tide allowing. 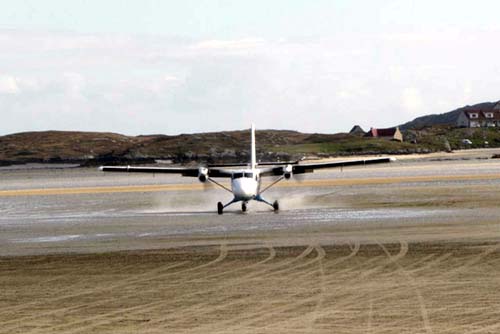 In 2011 it won the ‘World’s Most Stunning Airport Approach’ title, beating off competitors from as far away as Rio de Janeiro and Los Angeles.

Mr Galbraith said: “Apart from the Twin Otters landing, the baggage reclaim is the next most photographed thing when people land.

“It’s definitely different to what people are used to but that is what people love about it.”