SEALS used by Robert the Bruce to stamp tax documents are expected to fetch a six figure sum when they go on auction this week.

They date from 1322 when they were used to mark the authority of Robert the Bruce and Dunfermline Abbey to collect customs. 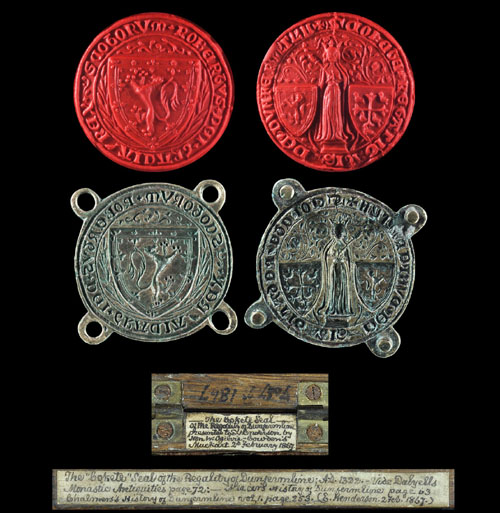 The cokete seals, which are described as “unique and very important”, are being auctioned by London based Timeline Auction from this afternoon (Thu) until Friday.

The item is considered especially rare because the custom seals were normally destroyed when obsolete or damaged.

There are slight signs of damage to the seals in the form of cracks which can be seen at the edges. This is believed to have occurred as a result of the pressure applied when stamping the seals into beeswax.

It is not known how the seals managed to survived. One theory is that they were discarded when the damaged became evident but were not considered broken and never destroyed. 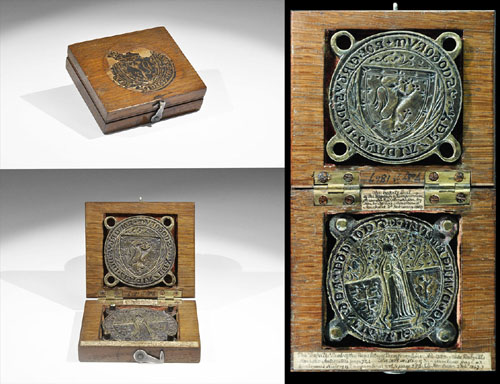 The seals depict St Margaret, the founder and benefactress of the abbey, in a robe and crown with sceptre, between shields bearing the lion rampant of Scotland and the arms of Dunfermline Abbey.

The reverse counter seal has the lion rampant and the carried the legend ‘Robertvs Dei Gracia Rex Scotorvm which translates to Robert, by the Grace of God, King of the Scots.

The two seals are presented in a velvet-lined wooden box that states they were presented to S. Henderson by Hon W. Oglivie- Cowden’s Muck(h)art 2nd February 1867.

The provenance of the items indicates that they were inherited by an Ebenezer Henderson who was the son of a Dunfermline watchmaker whose passion for scientific study resulted in him being elected to Astronomical and Royal Antiquarian societies.

Henderson’s ownership also indicates that they were at one time exhibited in the library of Scotland’s Society of Advocates.

Robert the Bruce’s reign as King of Scotland lasted from 1306 until 1329 when he died on 7 June and was buried in Dunfermline Abbey beneath what was then the centre of the church, below the high altar and alongside his second wife, Elizabeth de Burgh.

His remains were moved in 1819 after they were discovered by workmen who came across a decayed oak coffin, still draped in shreds of gold cloth. They were then placed in a new led coffin and reburied in Melrose Abbey.