The superstar Scots DJ tweeted the black and white snap of himself gazing into the distance with his shirt undone, showing off his impressively toned torso.

He was recently signed as the Italian label’s new brand ambassador after being kitted out in its designer gear for this year’s Grammy and Brit awards. 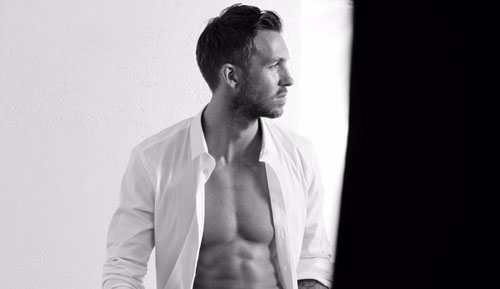 After inviting him to its Milan show earlier this year, the fashion house decided to go a step further by having the 30-year-old star in its new global campaign.

And it is clear that Calvin, originally from Dumfries, is happy with the results from the recent shoot.

He uploaded the revealing picture to Twitter with the caption ‘Some more behind the scenes from recent Armani shoot’.

Fans were quick to shower the star with compliments.

Annie Mundo wrote: “OMG you are so hot.”

One user, who goes by the name of ‘Stay Faithful’ added: “Sweet baby Jesus, laawwwdddd.” 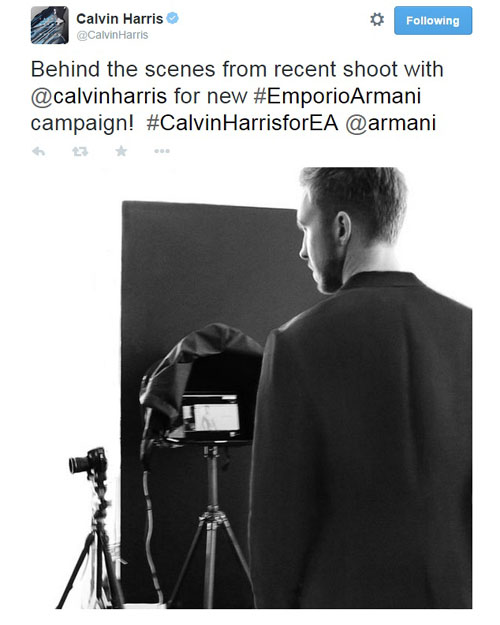 Two weeks ago he shared a different preview shot, this time from behind where he can be seen wearing an Armani jacket and looking over some cameras.

Calvin is no stranger to taking his clothes off. Earlier this year he completed the ALS Ice Bucket Challenge without a shirt on, helping raise money for the motor neurone disease charity.