A DISPUTE between two men over a prescription ended with one of them being crushed under the wheels of a lorry, witnesses claimed yesterday (Mon).

Hydraulic lifting gear had to be used to free the victim from under the HGV following the horrific incident in Edinburgh.

The man was taken to hospital where his condition is not known.

A bloody pile of clothes and a training shoe could be seen next to the lorry. The city’s busy Ferry Road was closed in both directions for several hours.

It is understood both men involved in the incident had been to a branch of Boots.

One witness claimed: “Two men were having an argument about a prescription.

“One just walked away afterwards.

“They had to use hydraulic lifting gear to get out the person under the vehicle.” 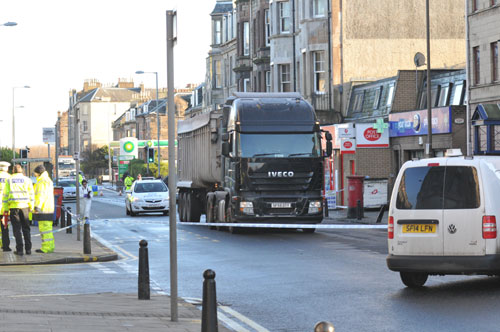 Scottish Fire and Rescue hydraulic equipment was used to free the victim from below the lorry.

A spokesman from the Scottish Ambulance Service said: “A patient has been transferred from the scene to Edinburgh Royal Infirmary.”

A police spokeswoman said: “Police in Edinburgh are currently in attendance following a serious road traffic collision on Ferry Road involving a truck and a 36-year-old man.