SANTA could be struggling to make it on December 25 if these snaps are anything to go by.
A passer-by photographed Santa parked on double yellow lines in Edinburgh at the weekend.

And it looked on first inspection that he’d fallen victim to the city’s notoriously efficient army of traffic wardens.
Fractions of a second count when you’re getting ready to deliver billions of gifts around the globe.
And then there’s the risk of getting wheel-clamped or even having your sleigh confiscated and crushed if you don’t have road tax.

But, as snapper Lydia Valtind explained, the traffic wardens were in fact Air Training Corps volunteers helping out at a charity event.
The picture – which was also picked up by Scotland’s Worst Drivers website – shows the sleigh moments before a Challenge Scotland toddler walk began in Stockbridge.

Lydia said: “I took the picture because it actually looked like Santa was being booked by traffic wardens.
“They were just about to set off on a charity walk and were stopped on the side of the road.
“There were a few people taking pictures, it was quite a funny sight.
“Don’t worry kids – Santa will still be arriving.” 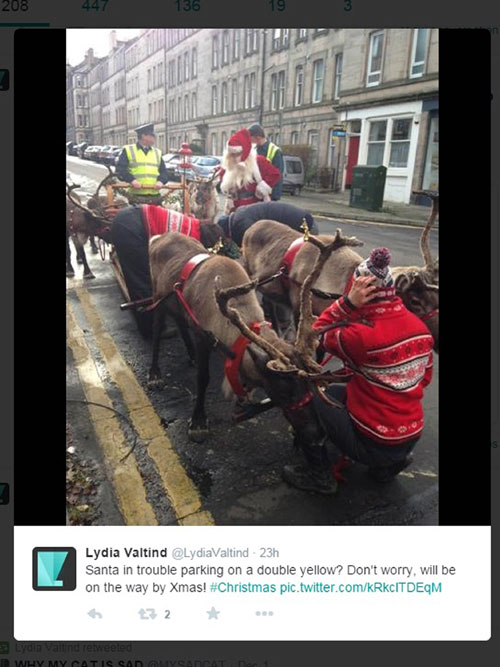