The moment was recorded in a behind the scenes video of his famous stunt on the Inaccessible Pinnacle on Skye.

“I knew they wanted to get some shots of me climbing up the back,” said MacAskill. 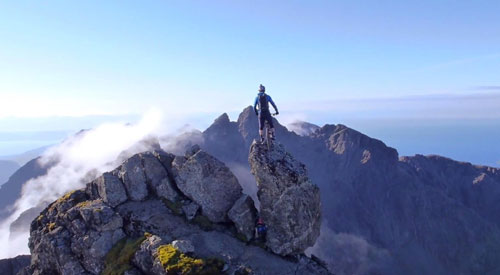 “The plan was that I was going to be roped up for them. But after climbing up I thought ‘well I can do this with my bike on my back and no rope’.

“So much to everyone’s dismay I unclipped from the rope.”

In the video footage a worried crew member can be heard saying “Dude keep the rope on”, while MacAskill calls back “This bit’s fine”. 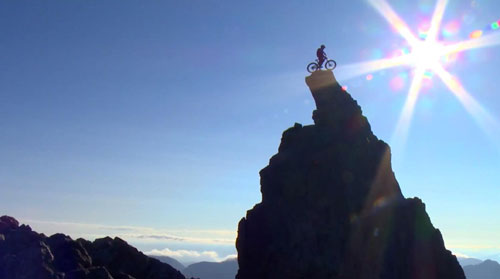 Another crew member nervously calls out: “Can we get this done quick so we can get it over with?”

Upon reaching the top of the dizzyingly high and narrow pinnacle MacAskill can be heard saying “Sorry about that.”

“I think, rightly so, everyone else in the team wasn’t impressed when I undid the rope,” the daredevil recalled. “But as I say I felt totally comfortable being there.”

The resulting seven minute film entitled “The Ridge” was released in October and has been viewed more than 25 million times.

Behind the scenes footage published on YouTube yesterday (Thursday 18th) revealed the true terror behind what the 28-year-old has dubbed the ‘Braveheart shot’.

The short clips posted on YouTube by video creators Cut Media also included behind the scenes footage of the ‘Bump Frontflip’ over a barbed wire fence.

The crew had borrowed mats from the local primary school so MacAskill could practice the deadly stunt which had never been seen before.

Another video shows MacAskill tackling ‘Collies Ledge’, one of the most treacherous locations in the film.

The drones used to film MacAskill and his stunts on the mountain range also feature in the behind the scenes footage.