A SCOTS holiday goer’s bid to make his brother jealous backfired after his nerve failed him on one of the world’s most spectacular bungee jumps.

Connor Robertson hates heights but decided to do the 150ft leap in New Zealand just so he could boast about it to his brother – who is desperate to do a bungee jump.

But when it came to the big moment, Connor , 22, pulled up at the edge three times before tripping and falling off the platform.

To make matters worse, Connor, from Glasgow, shelled out almost £100 for the privilege.

Connor was in Queenstown, South Island, last month and plucked up the courage to try the legendary “Ledge bungy”.

The platform sits just out from the side of a of a mountain, at over 1,200ft above sea level. 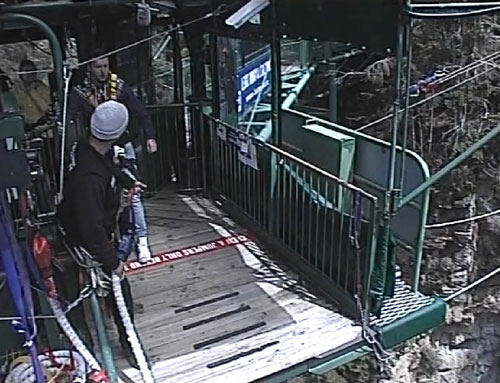 The bar worker said: “I’m terrified of heights, absolutely terrified but my brother’s always wanted to do a bungee jump so I thought I’d do one as a sort of ‘get it up ye’ to him.”

In the video, a clearly nervous Connor, says: “Oh my f***!” before walking back and listening to the instructions.

But the fearless Glaswegian can’t let go of the railing and almost wheels into the instructor.

On his fourth attempt, he desperately tries to stop himself but trips and falls off the edge, shouting “Ah naw! Naw!”

He said: “I tried to stop myself on the final attempt but I’m a size 12 shoe and I tripped over my own feet and fell over the edge.

“My brother shows the video of it to anyone he can so aye, it completely backfired but I’m still glad that I did it.”

Connor’s brother Barry, 27, also from Glasgow, posted a “revenge” picture of him laughing his head off at the clip.

Barry, who is doing a PhD in forensic and analytical chemistry at Strathclyde University, said: “I can’t stop watching it and everyone from my office has seen it too.

“I must have watched this video at least 20 times so far. He’s showed me, alright!”