Astounding footage of fishermen clinging onto a sinking boat before being thrown into the sea in north of Scotland has emerged.

The terrifying video shows the crew of Irish vessel, The Iuda Naofa, swept into the Atlantic Ocean by waves at the Coastguard struggle to grab them and winch them to safety.

The crew, dangerously close to the still moving screw of the upturned boat, lose their grasp of the stern and fall about 6 ft into the waves. 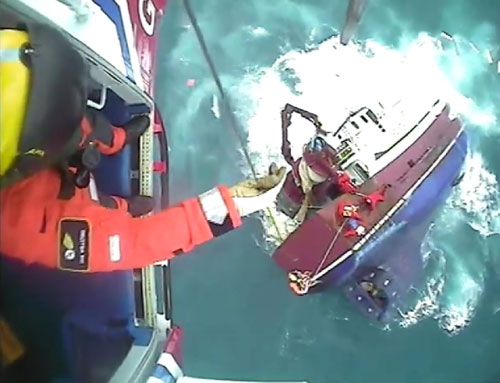 They were left helplessly floating on the water before being rescued one by winch.

The rescue happened on Tuesday 50 miles north of the Butt of Lewis off the remote Western Isles.

The crew had issued a distress call after their boat started taking on water. 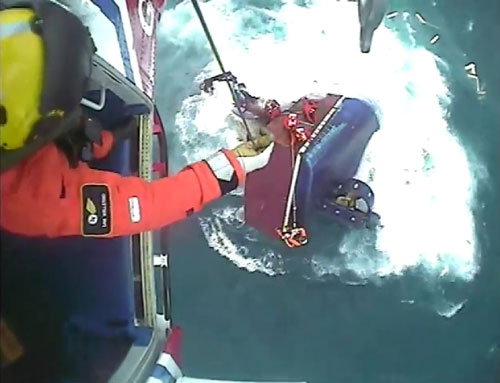 The helicopter rescue team from Stornoway arrived to drop a salvage pump onto the boat for the to pump out the rising sea water but already the vessel was swamped and started to sink.

The dramatic rescue followed as the Coastguard team picked each of the men from the water and to safety. 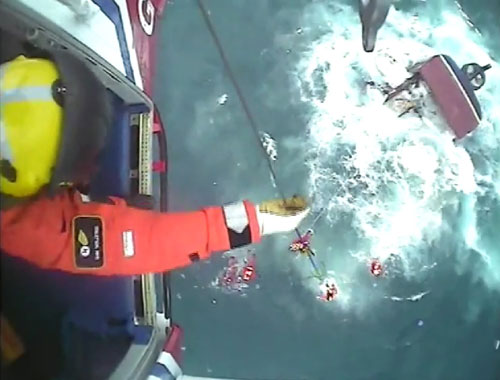 Two were taken to the nearby fishing vessel, the Star of Hope, while three were transferred hospital on the Western Isles Hospital on the Isle of Lewis, where they treated for mild hypothermia.

Coastguard Duty Watch Manager, Paul Tunstall said: “The weather conditions on scene were very rough seas with southerly force 6 winds, evacuating the five crew swiftly and safely before the vessel went down was a great achievement.”