ONE of Britain’s biggest supermarkets has taken a Burns Night bashing – after axing veggie haggis.

Asda is no longer putting full-size vegetarian haggis on the shelves of all stores, claiming lack of demand for the meat-free product.

From now on, instead of the standard 1lb (454g) beastie the firm will only stock tiny two-slice packs of veggie haggis at selected stores.

One top chef was yesterday inspired to Gordon Ramsay-style levels of outrage, branding the supermarket “f***heads”. 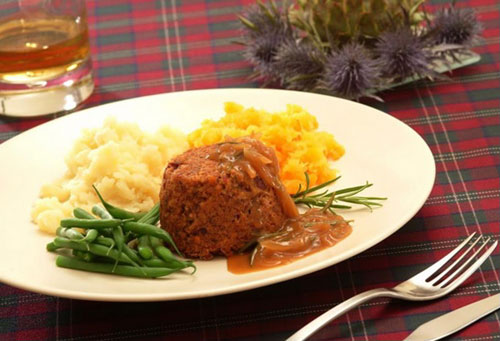 Asda had stocked vegetarian haggis made by Halls of Scotland.

One customer at their Chesser store in Edinburgh, who asked not to be named, complained: “I couldn’t believe it when two members of staff told me they no longer stocked it. It’s one of the biggest stores in the country in Scotland near Burns Night and you can’t get a veggie haggis.”

A spokeswoman for Brown’s Food Group, which owns the brand, confirmed Asda had stopped stocking the product although it was still for sale in Aldi.

“I don’t know whether they’ve lost sales, but they’ve certainly de-listed it,” she said.
Ben Reade, co-owner and head chef at the Scratch Series in Edinburgh, stormed: “Asda are f***heads.

“It’s a shame they have started to take vegetarian haggis off the shelves – they have a responsibility to provide for people.
“Haggis is such a traditional food and I think it is one of the few vegetarian options that can sometimes taste better than its meat counterpart.

“I’ve been a vegetarian for 13 years and I eat veggie haggis at least once a week – it’s delicious.
“Maybe the supermarkets have a ploy where they think by taking a £2 haggis off the shelves, vegetarians will then go and spend £8 on nuts instead.”

A spokeswoman for Halls’ big haggis rival, Edinburgh-based Macsweens said yesterday that they had seen a “huge increase” in sales of vegetarian haggis this month.

“Sainsbury’s and Waitrose have reported a huge increase as well. I guess with the veggie version, people are heating healthier in January.”

Eilsa Allen, of People for the Ethical Treatment of Animals (PETA) called the decision “surprising” and said Robert Burns would himself have eaten the delicacy.

Miss Allen said: “It’s surprising the store doesn’t carry veggie haggis, which is full of all the flavour but none of the cruelty or cholesterol of traditional haggis.

“Robert Burns recognised that both mice and men have the capacity for suffering and can feel “grief an’ pain”.

Lynne Elliot, Chief Executive of the Vegetarian Society, said: “Ensuring good provision of vegetarian options is vitally important at any time of the year.

“There is a common misconception that feasts need to include meat, but this is simply not the case.”

A spokeswoman for ASDA said: “The sales of this Halls vegetarian Haggis were unfortunately not very high, which is why we took the decision to delist it. We are happy to review this decision based on feedback from our Scottish customers.
“We do sell a smaller 130g Macsween vegetarian haggis in 51 Scottish stores which costs 72p, but this isn’t available in Chesser.”

“I’m sick and tired of being treated like a rabbit with no appetite.” Film director blasts BA over “pathetic” plain tofu veggie meal